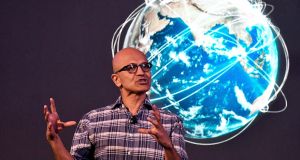 Tech giants Microsoft and Facebook both beat market estimates when they reported on Wednesday night.

The company also said business was steady in the first few weeks of April, sparking a surge in its shares. The social-networking company said sales came in at $17.7 billion (€16.3 billion) , ahead of Wall Street estimates of $17.3 billion, according to data compiled by Bloomberg.

The results include just a few weeks in March when coronavirus lockdowns began to hammer the economy.

On March 24th , Facebook warned that its advertising business was “weakening.” The company does not issue revenue guidance, but said on Wednesday that revenue in the first three weeks of April was roughly in line with the same period a year earlier. “After the initial steep decrease in advertising revenue in March, we have seen signs of stability,” the company said in a statement.

Facebook shares jumped more than 8 per cent in extended trading. They closed at $194.19 in New York earlier.

Microsoft said quarterly sales and profit rose, buoyed by demand for internet-based software and cloud services needed to accommodate a shift to remote working during the coronavirus crisis.

Profit in the period ended March 3st1 rose to $10.8 billion, or $1.40 a share, the company said Wednesday in a statement. Sales rose 15 per cent to $35 billion. That compares with average Wall Street estimates for $1.28 a share in profit and $34 billion in sales.

Analysts had reduced projections in the past month after Microsoft cautioned sales wouldn’t meet forecasts in its PC software and hardware business.

Microsoft is better positioned to weather the Covid-19 pandemic than some technology peers because chief executive officer Satya Nadella for years has been moving the company to focus on cloud software. As the virus shut down workplaces, the company has seen increasing demand for internet-based Office and conferencing software that keeps employees connected and productive at home.

Much of Microsoft’s software is also now sold by subscription, which means customers generally keep paying even amid a slowdown.

“Microsoft revenue is less consumer-centric and far more recurring, and when you go to a subscription, you have a pay-for-it-or-lose-it mindset,” said Mark Moerdler, an analyst at Sanford C Bernstein.

Microsoft shares rose 1.5 per cent in extended trading following the report. Earlier, they closed at $177.43 in New York. The stock has gained more than 13 per cent in 2020, giving the company a market value of $1.35 trillion – making it the biggest US publicly traded company. – Bloomberg