Review: On the face of it, the newest model hasn’t changed much, but look closer 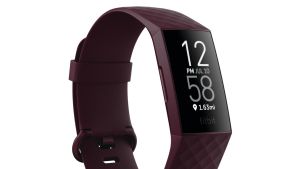 Where to buy: www.fitbit.com

When it comes to fitness trackers, Fitbit has a lot of experience. The company has been at this for a while now, going from the clip-on trackers to the activity bands that we all seem to favour these days. There have been some extra features, sure, but with Fitbit devices you know what you are getting: activity monitoring, heart rate tracking and sleep, all done automatically. On a day-to-day basis, you don’t have to do a thing.

The last couple of years has seen extra features such as NFC for payments, and Fitbit’s premium service that gives you more health insights than before – if you are willing to pay the monthly fee once the free trial is up.

But if you were to look at the Fitbit Charge 3 side by side with the newest addition to the lineup, you might find it hard to distinguish between the two. They look essentially the same: silicon band framing a grayscale touch-sensitive screen, with no buttons to spoil the sleek lines.

It is only when you look a little deeper that you spot the differences.

This biggest is that the updated version of the Fitbit Charge comes with integrated GPS, something that was missing from its predecessor. That left you relying on your phone for location when you were out for a run, for example, and while that doesn’t seem like the biggest of hardships, it could be inconvenient if you wanted to switch off. Before the Charge 4, the only Fitbit device currently available with built-in GPS was the Ionic (we’re discounting the now-defunct Surge).

You pay a price for that convenience, however. The battery life on the Charge 4 is officially seven days, but GPS will considerably impact on that, depending on how often you use it.

You also get NFC for contactless payments through Fitbit Pay, provided your bank supports it

You’ll still get a few days out of it, though, even if you are going for a GPS-tracked run once a day. It’s certainly a lot less effort than some of the full-blown smart watches.

That’s partly due to a lower power demand from the screen (it’s still small enough), and grayscale rather than colour. You swipe your way through menus, with a maximum of two options presented on screen at the same time, making it easy to choose the correct one. The screen may be small, but it is responsive, so the frustration is minimal.

You also get NFC for contactless payments through Fitbit Pay, provided your bank supports it. In Ireland, that is AIB and KBC on the traditional banking side of things. If you have a Revolut card you can use that debit card with the service; ditto for Transferwise and Bunq. Boon is another service in Ireland that supports Fitbit Pay.

The band is water-resistant to 50 metres, so you can take it swimming, and it will certainly stand up to a bit of sweat or running in the rain.

You can save six shortcuts for your favourite exercises, but using the app you can change those favourites from the standard run, bike, walk to Pilates, yoga, elliptical trainer workouts and so on.

The device will pick up your exercise sessions automatically – if you decide to pop out for a run and forget to start the session on your wrist, the Charge 4 will do it automatically. But it won’t track your run with GPS this way, so if you need more data, you’ll have to remember to manually start your workout.

You get the basic data on your workouts: distance, heart rate, speed and the route, where applicable. It’s enough for the casual runner, and if you need a little more, the system will analyse thing like your active zone minutes – how long your heart rate is elevated enough to be in the fat-burning, cardio and peak heart rate zones for your particular age and fitness levels – and tell you how many calories you have burned in your exercise sessions.

A lot of that detail comes from the app, which is easy to navigate and will allow you to log extra things such as your food, water and weight.

The good
Built-in GPS is a good addition here, despite the impact on battery life. Having Fitbit Pay will be of use to some owners, but it depends on banking arrangements. And there may have been little change in design, but the Charge 4 is sticking with a tried and tested formula.

The not-so-good
If you were hoping for a major design change or a colour screen, you are in for a disappointment.

The rest
Google is in the process of buying Fitbit, which is something to consider. There has been a bit of consolidation in the smartwatch sector in recent years; Fitbit bought Pebble back in 2016, and shortly afterwards shut down its web services. Now Google, creator of the Android Wear platform, is buying Fitbit, and who knows what the future holds?

There is also another thing for iOS users: since the update to iOS 13, some – not all – users have had issues with keeping their Fitbit devices connected to their phones, and that has a knock-on effect for syncing data with your app. It’s not something I experienced, and I have an iOS 13 device, but it is still a complaint on Fitbit’s forums.

The verdict
The Charge 4 may not look different to its predecessor, but it is worth the upgrade for the integrated GPS alone.

This article was amended on May 1st 2020

1 BOI customers to be charged twice with bank fees on New Year’s Eve
2 Irish designer of Oxford vaccine : ‘I’ve never worked so hard in my life’
3 Covid-19 will worsen housing affordability, report warns
4 Chris Johns: I think we are on the cusp of an economic boom
5 Irish boss of Qantas says Covid vaccines will be mandatory
Real news has value SUBSCRIBE