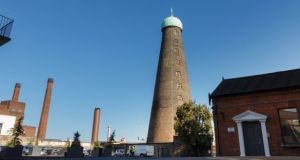 The Digital Hub is the largest cluster of technology, digital media and internet companies in Ireland.

Hundreds of companies have passed through the doors of Dublin’s Digital Hub since it was established in 2003, with household names such as Amazon and Etsy among them.

The city-centre campus is currently home to nearly 100 firms, including Bizimply, Eventbrite, Lonely Planet and RT (Russia Today), which collectively employ more than 700 people. And yet when commentators talk of Dublin being a digital hub, the hub itself is generally absent from the conversation.

The Digital Hub’s success in attracting companies has largely been overshadowed in recent years due to the rise of the Silicon Docks, that stretch of land in and around Grand Canal Dock which has become home to tech giants such as Google and Facebook.

Its somewhat inauspicious start as home to Media Lab Europe, a business venture established by the celebrated MIT that went belly up early on, certainly didn’t help matters either.

The Digital Hub is currently the largest cluster of technology, digital media and internet companies in Ireland. It provides space for indigenous enterprises to scale and grow alongside global companies and industry organisations. The hub operates across nine buildings on a 6,500sq m (70,000sq ft) campus in the historic Liberties. It offers flexible office arrangements and business support services to growing tech companies and is also involved in providing digital-related learning and training opportunities geared to the local community.

However, with a steady increase in co-working spaces coming on stream in the capital, and as work continues to merge the Digital Hub Development Agency with Dublin City Council, some question the value of the hub and whether it can fulfil its role of being an “international centre of excellence for digital content and technology enterprises”.

Perhaps unsurprisingly, the Digital Hub’s head, Fiach Mac Conghail, is not one of them. Mac Conghail, formerly director and chief executive of the Abbey Theatre and a senator from 2011 to 2016, has kept a relatively low profile since taking over at the helm last October. But he’s bullish when it comes to talking about what he intends to achieve during his time in office.

“My job is to double if not treble the amount of office space available within the next five years and to do that through private-sector involvement,” he says.

“We had revenue of approximately €4.4 million last year, 64 per cent of which was self-generated with the rest coming from State funding. I expect us to have grown self-generating revenues to over 70 per cent this year with a plan to become completely self-financing within my tenure,” Mac Conghail adds.

While he accepts the Digital Hub has not been as front and centre as it could have been of late, Mac Conghail is eager to talk about its contribution to the capital.

“We are an important part of the city’s tech ecosystem. Perhaps what we were doing got lost in the white noise of what was happening in Dublin 2 and Dublin 4 and because we went through a bootstrapping period, but nothing has changed in terms of the motivation of the hub, which is to develop a thriving cluster for both indigenous and international businesses,” he says.

Well-known companies such as Distilled Media Group (Daft.ie), Havok, Houghton Mifflin Harcourt (Riverdeep), Kavaleer, Lincor, MTT, Slack and Stripe have all been based at the hub at certain points. Currently it has 95 firms on campus working across a number of different sectors.

“We have a churn rate of about 20 per cent a year, which we try to encourage because you need to have firms coming and going to keep things vibrant,” says Mac Conghail.

As he sees it, the hub serves a valuable role in helping companies progressing beyond “one man and his dog-type” operations and are looking to scale. As well as seeking to attract more female founders and start-ups formed by migrants, Mac Conghail wants the hub to be in a position where it can have larger companies’ on site as well as start-ups.

“Our vision is to have a few companies employing between 150 and 200 people each. My challenge though is that, if I bring in a very large firm, it could squash out some of the smaller ones, so it is a balancing act. While the finance director would be pleased, some of the dynamism we have here would undoubtedly get lost,” he says.

Mac Conghail talks of “curating” a cluster because of the mix of companies he wishes to see based at the hub.

“We’re doing brilliantly in terms of attracting both indigenous and international companies in some core areas, such as elearning, telecoms, animation and app development, but we could be doing greater work in sectors such as connected health. My big challenge there though is engaging with the HSE and hospitals to break through the bureaucracy,” he says.

Mac Conghail is keen to highlight the flexibility the hub offers entrepreneurs.

“We don’t do five-year leases but offer very flexible short-term agreements to help companies scale up and down. For example, we have countless companies that have moved into bigger offices as they’ve grown but we’ve also helped the likes of animation studios that might want a big space while in production but then need to scale down quickly afterwards,” he says.

The Digital Hub was fantastic for us because they were so flexible, which is something that isn’t easily found

That flexibility has been key to attracting companies over the years as Brian Fallon, co-founder of Distilled Media – which includes property website Daft.ie – makes clear.

“The Digital Hub was fantastic for us because they were so flexible, which is something that isn’t easily found,” says Fallon on the years spent at the hub as Daft.ie gained traction.

“We started in a room that was about the size of a toilet cubicle and progressed from there. The hub was great in terms of assisting our growth,” he added.

So good, in fact, that when Daft’s former chief technology officer Ciaran Maher established his own company, Square One, in 2013, he promptly moved it into the hub.

“We’ve moved offices within the Digital Hub about four times over the last couple of years as we’ve grown and I even ended up in one of the of the offices I was formerly in with Daft!, “ says Maher.

“The hub has meant we’ve not got caught in any long-term rental agreements and has also been useful in terms of cross-collaboration, with us working with the likes of Silicon Republic, which is also based here,” he adds.

Mac Conghail stresses the hub is not directly in competition with either the Silicon Docks or newer co-working spaces such as Dogpatch Labs. Instead he sees it serving an invaluable role in helping entrepreneurs who are growing.

“I think there’s been maturation in terms of how everyone looks at the start-up ecosystem in Dublin. We’re all very much in it together these days. For example, I would be in regular contact with Paddy Walsh of Dogpatch,” he says. “The real winner here is Dublin, which is seeing a lot of complementary hubs opening up that are both co-operating and competing with each other.”

Others agree. Joe Healy, divisional manager with responsibility for high potential start-ups at Enterprise Ireland, for example, believes the hub serves as a valuable asset.

“Space is at a premium in Dublin and there are lots of companies that are too big for the likes of Dogpatch that need a home. The hub is an interesting space in a decent location and while we don’t have many dealings with them ourselves, it undoubtedly has an important role to play,” says Healy.

“It is important that clusters like the hub exist as they enable people to engage with each other in a spontaneous way and encourages shared experiences and the opportunity to learn and recruit from each other,” she says.

“It’s also great to see a mix of companies in terms of areas, skill sets and size in one space as no matter how much they have their heads down they will inevitably end up mixing with each other,” Bushnell adds.

With the Digital Hub having recently taken on many of Ms Bushnell’s former duties as start-up commissioner and with plans to increase the amount of space it offers to entrepreneurs, Mac Conghail is betting on a promising future for the organisation he leads.

“Dublin 8 is still an undiscovered treasure in the capital with lots of exciting changes going on and I want to ensure the Digital Hub is at the centre of things so that it benefits entrepreneurs, the local community and the city itself,” he says.