‘It began because Steve hated this guy at Microsoft’ 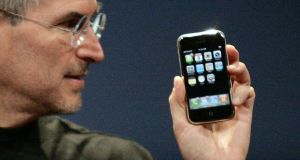 Steve Jobs with the iPhone in 2007

Some of the greatest gadgets start with a flash of inspiration by a designer. Others are the result of a technological breakthrough. Apple’s iPhone, which went on sale 10 years ago this week, began with a grudge.

“It began because Steve hated this guy at Microsoft, ” said Scott Forstall, Apple’s former software chief and one of the top deputies to the company’s late co-founder Steve Jobs.

The touchscreen era began 10 years ago on June 29, 2007, when the iPhone first went on sale. Mr Forstall recounted the animosity behind its creation at an event at the Computer History Museum in Silicon Valley last week, his first such interview since leaving Apple in 2012.

Before the iPhone was a phone, it was a tablet and the touchscreen technology that would later find its way into the iPad began as a secret research project commissioned by Jobs, Mr Forstall recalled.

The offending Microsoft employee, who was a friend of a friend of Jobs, had been bragging about the software company’s new tablet computer, which used a stylus for input. “Any time Steve had any social interaction with that guy, he came back just pissed off,” he said.

After one such weekend encounter, Jobs arrived at Apple on a Monday morning fuming: “Let’s show them how it’s really done.”

Microsoft were “idiots”, Mr Forstall recalled Jobs saying. “You don’t use a stylus . . . You are born with 10 styluses.”

Apple has gone on to sell more than 1bn iPhones, making it one of the most successful consumer products of all time and propelling the company to record-breaking profits. Mobile industry commentator Horace Dediu has estimated that iOS devices and apps will together have generated more than $1tn in revenues for Apple by the end of 2017.

Yet despite the urgency with which Jobs instigated the development of what would become the iPhone’s multi-touch technology, the project languished for several years.

It was revived only when Jobs, looking to head off looming competition to the then-dominant iPod music player, suggested touch technology would make mobile phones less “angsty” to use.

In the mid-2000s, when the Motorola Razr became a bestseller, traditional phone manufacturers such as Nokia were being “incremental”, said Hugo Fiennes, another former Apple engineer who spoke at the Computer History Museum’s event. “At Apple there was no holding back.”

Development of the iPhone was famously secretive. Employees working on “Project Purple” were not even allowed to tell their families what they were creating. Teams working on different elements of the device were unaware of what each other were doing.

Mr Fiennes, who was part of the team working on multitouch hardware, said the first time he saw the resulting software features such as “pinch to zoom” was when Jobs unveiled it at the iPhone’s launch event.

Mr Forstall had no experience in telecoms before working on the project and had never sent a text message before doing so on an iPhone. Yet despite this, Apple considered buying its own mobile spectrum or becoming a “virtual” mobile network operator, reselling another telecoms provider’s services under its own brand, he said. Ultimately the company decided to partner with AT&T to distribute the device.

“Of course [all the secrecy] was an impediment,” said Nitin Ganatra, who was director of engineering for iOS applications until he left Apple in 2012. “But at the same time, there was so much value there as well, by having this secret . . . nobody knew what was coming.”

The iPhone’s timing turned out to be good, with internet services such as YouTube and Google Maps on the rise and the emergence of affordable mobile data contracts.

Apple’s new handset really began to fulfil its potential in 2008 when, despite Jobs’ initial reluctance to allow software from outside of the company to run on the device, the App Store made its debut.

The iPhone redefined what a mobile device could do, prompting countless imitators (and more than a few lawsuits by Apple as a result). The iPhone now accounts for about two-thirds of Apple’s revenues and an even larger share of the mobile industry’s entire profits.

While Mr Forstall admitted that pricing “was a challenge” - the upfront cost of the device had to be cut by $200 just a few months after it went on sale - he never had any doubt that it would be “huge”.

“Using it, it never felt like work,” he said. “And I knew, this is it - everything is going to behave this way.”

1 What is Covid Tracker Ireland?
2 Central Bank considers legal action over Covid-19 insurance cover
3 Ireland’s economy forecast to shrink 8.5% due to Covid-19 pandemic
4 Deustche bank to pay out $150m over Jeffrey Epstein dealings
5 Why gift a son now if it eats into his tax-free inheritance threshold?
Real news has value SUBSCRIBE