These are aimed at kids, and come in a range of cute designs 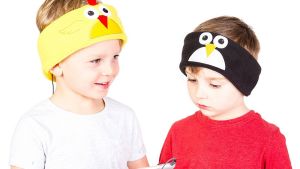 Because Snuggly Rascals are aimed at children they are volume-limited to 85dB, making sure you don’t damage their hearing

How comfortable are your headphones? The Snuggly Rascals headphones could possibly be the most comfortable that have crossed my desk. Similar to the Sleep Phones - headphones designed to be worn while you sleep - they have a fluffy, fleece band, with ear pieces that can be removed to wash them.

The set that arrived for review here were the penguin themed ones; my three-year-old took one look at them and proclaimed them hers. She put them on - the band is adjustable for smaller heads, with a soft velcro closing - and refused to take them off for a few hours. I finally prised them from her grasp after she fell asleep; small children are nothing if not tenacious.

In the interests of this review, I tried them out for myself. One thing that is true: they’re very comfortable. They don’t pinch and they are soft enough to wear for long periods of time without causing any discomfort. They’re not wireless, which is both a good and a bad thing. Good, because it means you don’t have to charge them; bad because there is another cable that will get tangled up. Still, it means it is easy to get them set up to use with a range of devices - as long as it isn’t one of those that has ditched the headphone jack, of course.

Because they are aimed at children, they are volume limited to 85dB, making sure you don’t damage their hearing - or, more likely, that they don’t accidentally crank it up and do it themselves. It also means they’ll probably hear you when you are calling for them to clean their room or come for dinner, but they’ll try to ignore you anyway. It’s the truth you always suspected, confirmed.

The sound quality isn’t going to rival your expensive headphones, but it is good enough for children’s music, or for watching TV shows or movies on the move without annoying your fellow travellers.

The best thing about the Snuggly Rascals is that not only are they comfortable, you don’t have to worry about plastic bits being snapped off or in half. The cables may fray over time but they lasted significantly longer than other so-called child-friendly headphones I’ve seen in the past.

That band is also washable, so sticky hands or sweat isn’t really an issue.

Even though the colours and designs mean they are definitely more suited to children, there are quite a few adults I know who would love a aset of unicorn headphones. Still, if you can squeeze your head into the band and deal with the volume limits, there is absolutely no reason why Snuggly Rascals couldn’t do for adults too.

The soft band is impossible to crack. The velcro means it is adjustable for smaller and larger heads, and the ability to shift the ear pads means they are customisable for just about any child. You can also throw the band in the wash when it gets a little too filthy.

It can be hard to position the ear pieces inside the band at times, so once you get them set up to match your child’s head, try not to move them.

The different designs are cute and fun. The volume limit means you don’t have to worry too much about hearing damage, although you probably don’t want to leave them on for hours.

Great for children, and possibly a few overgrown kids too.