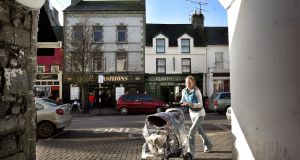 US financial technology company First Data is to create up to 300 jobs at a research and development (R&D) centre in Nenagh, Co Tipperary.

US financial technology company First Data is to create up to 300 jobs at a research and development (R&D) centre in Nenagh, Co Tipperary.

The company said it would need highly skilled employees to work on its payment technology platforms at the centre in a project supported by IDA Ireland.

First Data currently employs about 300 workers in two separate facilities in Dublin. The Nenagh operation will be its first outside the capital

The jobs announcement comes less than two weeks after Tipperary suffered a huge blow with C&C’s decision to close its water-bottling plant in nearby Borrisoleigh with the loss of 120 jobs.

New York Stock Exchange-listed First Data will base the new jobs at an existing 32,000 square foot building in Stereame Business Park in Nenagh and hiring is expected to start later this year, with business up and running early next year.

About 120 employees will lose their jobs in Borrisoleigh, located 24km from Nenagh, as a result although they were told they can apply for 80 new positions being created in Clonmel, 59km from Borrisoleigh.

The new operation being established in Nenagh by First Data is being backed by IDA Ireland whose chief executive Martin Shanahan said it was “an important investment by First Data in a regional location, with significant local economic benefits”.

Speaking from the World Economic Forum in Davos, Mr Shanahan described the decision as “a strong endorsement of the midwest region”.

The Taoiseach Enda Kenny said the Government is “determined to support strong job creation all over the country as the best way to keep the recovery going”.

Nenagh is in the centre of Minister for the Environment Alan Kelly’s electoral heartland, as the largest town in the former Tipperary North constituency, now part of the amalgamated all-county Tipperary constituency.

Mr Kelly described yesterday as “the most significant day for the town in over 30 years” and “a game-changer” for Nenagh and the county.

“The announcement of 300 jobs for Nenagh is the equivalent of almost 4,000 jobs for Limerick,” he said.

1 Life as a Facebook moderator: ‘People are awful. This is what my job has taught me’
2 Irish in-flight entertainment firm blames coronavirus for closure
3 Wealthy investors’ legal challenge against Revenue fails
4 Corporate tax loss from reforms may exceed forecasts, Ibec warns
5 Coronavirus: ‘All bets are off’, says aircraft industry chief
Real news has value SUBSCRIBE