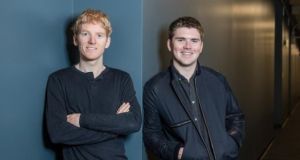 Limerick brothers Patrick and John Collison: The fundraise is the first time that Stripe has led a funding round although it has made a number of minor acquisitions in recent years.

Stripe, the online payments company established by Limerick brothers Patrick and John Collison, has led an $8 million (€6.8 million) Series A funding round for the Nigerian start-up Paystack.

Other investors in the funding round include credit card giant Visa, Chinese investment company Tencent, seed accelerator Y Combinator, and a number of angel investors.

The latest round brings Paystack’s total investment to date to more than $10 million. Other backers include Comcast.

The fundraising effort is the first time that Stripe has led a funding round although it has made a number of minor acquisitions in recent years.

Patrick Collison, Stripe’s chief executive, was quoted as saying that Stripe was excited to be backing Paystack.

Established in January 2016, the company has grown to process nearly 15 per cent of all online payments in Africa’s largest economy.

“As recently as 2015, it was really difficult for a developer or business owner in Nigeria to quickly start accepting online payments,” says Mr Akinlade, the company’s chief executive. “We started Paystack because we believe that better payments tools are one of the most important things that African businesses need to unlock their explosive potential.

“We think of Paystack as an amplifier of the incredible work that African business owners are already doing. With better technology tools, African businesses can be better equipped to play a growing role in the global economy,” Mr Akinlade added.

1 Sean Quinn stunned at rebranding of Quinn Industrial Holdings
2 Probate is changing: What does that mean for you?
3 Three Ireland switches on 5G network around the country
4 Irish golf tourism faces ‘wipeout’ unless Covid travel restrictions eased
5 D’Arcy appointment will not blow over
Real news has value SUBSCRIBE