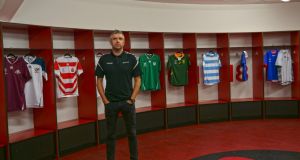 Newry-based sports tech company StatSports has signed up five more international rugby teams, meaning that its GPS tracking technology is now being used by more than half of the teams competing in the World Cup in Japan.

The fast-growing company, which is eying a flotation in the next two years, said the national teams of Canada, Fiji, Samoa, Uruguay and Russia have began using its Apex sports monitoring system to improve player performance.

This is in addition to Ireland, England, South Africa, Argentina, Georgia and the USA, which already use the group’s solutions

Overall, 12 out of 20 teams competing in the Rugby World Cup in Japan are using StatSports’ technology.

As well as rugby union, StatSports is also heavily involved in rugby league, AFL, NFL, basketball, hockey and athletics. In soccer, it boasts an elite client list which includes Premier League clubs such as Manchester United, Arsenal, Manchester City and Liverpool, as well as top Italian team Juventus and international federations including England, Germany and Brazil.

“”We are hugely proud to have such a significant representation at the most important rugby competition in the world. ,” said Sean O’Connor, the company’s co-founder and chief operations officer.

StatSports’ technology consists of small devices which are worn in vests and measure and analyse player performance in real time to provide instant feedback to coaching staff on metrics such as distance and speed, as well as levels of fatigue and injury risk.

Founded in 2008 by Mr O’Connor and Alan Clarke, Statsports made headlines globally last year when it signed a lucrative five-year contract with the US Soccer Federation.

It recently announced that soccer stars Raheem Sterling and Alex Oxlade-Chamberlain had each invested seven-figure sums in StatSports and agreed to become global ambassadors as part of a new funding round.

1 In this strangest of recessions, what happens next for Ireland?
2 Bank of Ireland sees about 2,000 staff apply for voluntary redundancy
3 Best Covid-19 ‘influencers’ will avoid hectoring
4 Michael O’Leary is the boss you want to lead an airline out of crisis
5 Estée Lauder staff at Dublin airport plan further strike action
Real news has value SUBSCRIBE