Should you buy the new Apple Watch?

Tech review: Will an always-on display and a built in compass help sway you to the Series 5? 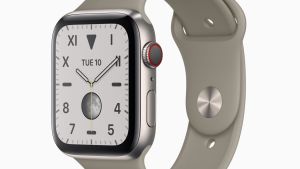 Series 5 Apple Watch: the always-on display means you have access to the information you need at all times. Photograph: Apple/PA Wire

When Apple unveiled its Series 5 smartwatch earlier this month, it also dropped the price of the Series 3 version. That left potential buyers with a dilemma: pay for the latest and greatest, with its heart-health functions, new hardware and improved display, or go for the device that costs significantly less but still functions perfectly well as a smartwatch.

If price is your main driver, read no further and buy the Series 3 now. If you want a bit more function for your investment, the Series 5 adds a few things that make it worth the price.

There is the always-on screen, for a start. One of the chief disadvantages of many smartwatches compared with a traditional one is that the watch face times out and fades to black. That is great for saving the battery but not for taking a sneaky glance to check the time. Trying to discreetly tap the watch can be more difficult than you’d think. And at times, you might just look a bit rude.

Apple has solved this by making the Series 5 with an always-on display. But it’s not just any old always-on display; Apple has created a dimmed-down version of each watch face so you still get the aesthetics of your chosen face, but with some of the elements altered. Neon colours might face out, or the background blur a little. If you are a fan of the Disney watch faces, for example, Mickey Mouse fades out but his hands remain, pointing to the time. It’s not just about time, though; if you choose watch faces that display your activity or diary notifications, they stay there, just a little dimmer. It’s a subtle but important difference that makes the Series 5 Apple Watch a little more useful.

You would think that this would have an impact on battery life; it doesn’t. The Apple Watch Series 5 still has the same battery life as its predecessors at 18 hours. The battery life itself may be disappointing for some, but the fact that the always-on display doesn’t make the battery last less time is a good thing. You’ll still be charging once a day/day and a half though.

There are other additions that have less obvious benefits. The compass, for example, may seem like something that you wouldn’t use unless stranded in the woods. And how many times have you used the compass app on your phone? But the compass in the watch is a hardware compass rather than software, and it can be set to magnetic north or true north. The real value of it though is in the data. The compass data can be used in apps such as Maps, or third-party apps that require that data, such as hiking apps. It’s the difference between pacing up and down a street to try to figure out what way you are going and having a prompt on your wrist that shows you when you are facing in the right direction.

The other main differences are down to software, the updated Watch OS 6, which will eventually come to all Apple Watches, down to the original. One of the most interesting features is the Noise app, which will take over the built-in mic in the Apple Watch to monitor the noise level around you. The software then rates the noise levels in decibels, giving you a warning when the noise level is one that will damage hearing if exposed to it over a long period of time. In the US, Apple is signing people up to be part of a research project on hearing, but on this side of the pond, you can only use it for your own education. Which isn’t a bad idea.

Another addition to the software is the Cycle Tracking. That may not be of interest to those who don’t have periods, but for those of us who do, it’s a long overdue addition. There’s no more need for third-party apps; you can track symptoms, period flow and extras such as fertility indicators if you need them. There are some predictions too, but these will take some time to settle, so the accuracy of these haven’t been tested yet.

The always-on watch face means you have access to the information you need at all times, including – most obviously – the time. And there’s little obvious impact on battery life, which is a thumbs-up for Apple.

Battery life is still only 18 hours. It would be nice to see this improved but given the breadth of features in the Apple Watch, 18 hours isn’t bad.

You still get the ECG function you got in the previous version of the Apple Watch, and access to Siri for voice commands. The addition of noise and cycle tracking through the updated software are also good additions. There are also titanium and ceramic options

If you want the latest and greatest, Series 5 is the one for you. If having better mapping and heart-health predictors isn’t important, Series 3 will suffice – especially with the price difference.

1 Nine more suing INM and Leslie Buckley over alleged data hacking
2 You now get almost nothing for your money . . . but it could be worse
3 Home or car: what’s the best use of my savings?
4 Restaurants file court actions against insurers over lockdown losses
5 VAT cuts are for businesses – consumers will still pay the same
Real news has value SUBSCRIBE