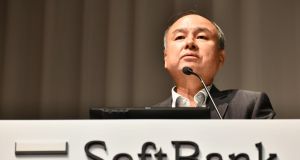 Masayoshi Son’s start-ups have had a rough few months, from a botched initial public offering (IPO) by WeWork to a sharp decline in shares of Uber Technologies. Now analysts are beginning to calculate that the damage for Son’s SoftBank Group will likely reach into the billions of dollars.

Mitsubishi UFJ Morgan Stanley Securities cut its profit estimate for SoftBank’s Vision Fund, its main investment vehicle, by 580 billion yen (€4.9 billion) to an operating loss of Y367.6 billion for the September quarter, citing declines in the stock prices of Uber and Slack and the withdrawn WeWork IPO.

Sanford C Bernstein and Co estimates that Vision Fund’s writedown alone could be as much as $5.93 billion (€5.4 billion), with another $1.24 billion drop for the portion of WeWork owned by SoftBank Group.

Son is going through a particularly rocky stretch after repositioning SoftBank from a telecom operator into an investment conglomerate, with stakes in scores of start-ups around the world. He built a personal fortune of about $14 billion with strategic bets on companies such as China e-commerce giant Alibaba.

But the recent troubles have weighed on SoftBank’s shares, pushing them down about 30 per cent from their peak earlier this year as investors grow skittish about start-up valuations.

SoftBank may book a $3.54 billion drop in the value of its Uber stake, a $750 million decline for Guardant Health and take a $350 million hit for Slack, according to Chris Lane, an analyst at Sanford C Bernstein.

Lane said the combined writedown for WeWork may be as much as $2.82 billion, assuming a slide in the company’s valuation to $15 billion from $24 billion, but remains uncertain. He said his estimates represent a worst-case scenario and may be offset by gains from other unlisted companies.

In an interview with the Nikkei Business magazine, Son said he was unhappy with how far short his accomplishments to date had fallen of his goals.

“The results still have a long way to go and that makes me embarrassed and impatient,” Son said. “I used to envy the scale of the markets in the US and China, but now you see red-hot growth companies coming out of small markets like in southeast Asia. There is just no excuse for entrepreneurs in Japan, myself included.”

“It only just began and I feel there is tremendous potential there,” Son told Nikkei Business. The strategy is to invest in companies that share his vision of a world being reshaped by artificial intelligence, he said.

WeWork and Uber may be losing money now, but they will be substantially profitable in 10 years’ time, Son said in the interview. At a private retreat for portfolio companies late last month, he had a different message: become profitable soon.

1 ‘My rent here is so low it’s a joke’
2 This charming man: how Paschal Donohoe won the Eurogroup presidency
3 Goodbody’s planned €155m sale to Bank of China falls through
4 ‘Sad day’ for House of Ireland as tourism retailer goes out of business
5 Business ‘will not survive’ on essential-only travel - task force
Real news has value SUBSCRIBE