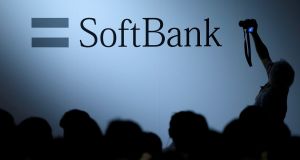 SoftBank has demanded that Moody’s remove all of its bond ratings on the Japanese conglomerate.

SoftBank has demanded that Moody’s remove all of its bond ratings on the Japanese conglomerate, after the rating agency issued a two-notch downgrade that cut its debt deeper into junk status.

The group led by Masayoshi Son, the risk-seeking Japanese dealmaker, immediately accused Moody’s on Wednesday of having “biased and mistaken views”.

The downgrade came two days after SoftBank said it planned to sell $41 billion (€37.8 billion) of its assets to pay down its heavy debt load and to hugely increase the scale of a share buyback.

Those actions have triggered a 55 per cent jump in SoftBank share price, which fell to a four-year low last week as investors panicked over its hefty debt exposure.

Moody’s cited SoftBank’s “aggressive financial policy” for its decision to cut its rating from Ba1 to Ba3, saying the value of the group’s portfolio would be reduced if it sold off its lucrative stakes in Chinese ecommerce group Alibaba and Sprint during the market volatility caused by the coronavirus pandemic.

The downgrade may increase borrowing costs for the group, which has $55 billion in net debt. – Copyright The Financial Times Limited 2020