Subsidiary that employs nearly 1,800 in the Republic marks $10bn increase in revenues 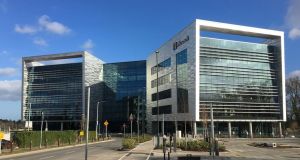 Microsoft Ireland’s headquarters in Sandyford, Dublin. The company is reportedly in talks to acquire a further 20 acres of land for a new data centre at Grange Castle Business Park, also in Dublin.

Microsoft Ireland, which employs nearly 1,800 people in the Republic, paid a $1.6 billion (€1.5 billion) dividend to its parent last year as the amount it paid in corporation tax almost halved.

The increase in profits came as the group recorded a $10 billion rise in revenues to $37.6 billion, due largely to it assuming control of the software giant’s operations for the entire Asia-Pacific region a year earlier.

That move marked a shift by Microsoft of $52.8 billion worth of assets from Singapore to Dublin and allowed it to write down the value of the assets by $3.4 billion, triggering a huge paper loss for the Irish unit.

The latest set of accounts, which cover the 12 months to the end of June 2019, show the subsidiary paid tax of $249 million as against $493 million in the prior year.

Total shareholders’ equity climbed by $104 million to $1.47 billion in the year under review as the dividend awarded to shareholders declined from $3.5 billion to $1.6 billion.

A breakdown of revenues show $21 billion derived from products and a further $16 billion from services. The remainder came from royalty income.

The Irish trading unit, which values its land and buildings at more than $1.4 billion, said it entered into a lease for $236 million last year for the provision of data-centre facilities. The company is reportedly in talks to acquire a further 20 acres of land for a new data centre at Grange Castle Business Park in Dublin, where it already has facilities.

However, there is likely to be a disparity between the bulk of the staff who would be on lower rates, and those on top salaries whose contribution would skew the average.

According to the accounts, the unit recently acquired a sister company – Microsoft Datacentre Holdings (HK) Limited – for $128 million.