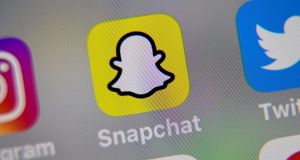 Snap Inc said it would no longer promote US president Donald Trump’s account in Snapchat’s Discover section, saying his inflammatory comments last week made the account ineligible for the curated section where users explore new content.

“We will not amplify voices who incite racial violence and injustice by giving them free promotion on Discover,” the company said in a statement.

“Racial violence and injustice have no place in our society and we stand together with all who seek peace, love, equality, and justice in America.”

Shares fell 2.4 per cent after the announcement.

Mr Trump’s Snapchat account, which consists mostly of campaign content and does not contain the informal rhetoric he regularly uses on his favoured platform Twitter, will remain public and accessible to people who follow it or search for it, Snap said.

Twitter ignited a furore last week by placing labels on several of Mr Trump’s tweets, as it said the tweets violated its rules on misleading information and glorifying violence.

Facebook declined to take any action on similar posts by the president, prompting an employee protest on Monday.

Snap chief executive Evan Spiegel told staffers in a memo on Sunday that Snap would “walk the talk” on divisive content, noting that the Discover section is “a curated platform, where we decide what we promote”.

The company said its decision to remove the president’s content from Discover was made over the weekend. – Reuters

1 Belgium helps Ireland to a Brexit boon
2 Can Grafton Street stop the flood of closures?
3 ‘My rent here is so low it’s a joke’
4 Irish tech firm to facilitate cashless tickets for hurling and football
5 ‘Sad day’ for House of Ireland as tourism retailer goes out of business
Real news has value SUBSCRIBE