Snapchat ‘discovers’ Irish content as it expands its shows

Eir Sport, Off the Ball and Foil Arms & Hog Show will be added to social media platform 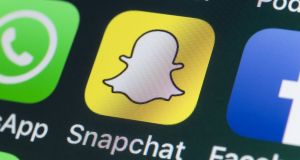 Snapchat has come under pressure in recent months from Facebook-owned Instagram. Photograph: iStock

Snapchat is adding local Irish content to its Discover section, signing up new partners that include Eir Sport and Off the Ball.

The Irish Independent, Joe.ie, Foil Arms & Hog and MetDaan will also be the initial partners for localised content, producing a mixture of Publisher Stories, which is magazine-style content, and Shows, which consists of five-minute episodes with a clear narrative, and using motion graphics, split screens and quick cuts. Among the five new Shows are Joe.ie’s Argue Me, Off the Ball’s The Crappy Quiz, and the Foil Arms & Hog Show.

The company launched the Discover feature in 2015, initially doing deals with 15 partners to produce content; that number has expanded to more than 100 globally. Since the beginning of the year, Snapchat said time spent watching Shows has more than tripled, and the third quarter saw 21 Shows reach more than 10 million monthly active viewers.

“More than two in five smartphone users in Ireland use Snapchat on a monthly basis, so we are thrilled to bring a more personalised content experience to them,” said Rami Saad, head of international content partnerships at Snap.

Once considered the future of social media, Snapchat has come under pressure in recent months from Facebook-owned Instagram, which has adopted some of Snapchat’s features such as “stories” that disappear after 24 hours. In the second quarter, Snapchat said it would switch to measuring active users by the month rather than using daily figures.

1 Wetherspoon’s panto-villain chairman may have the last laugh
2 UK needs to be honest about its Covid-19 strategy
3 British exceptionalism backfires in style as Johnson tests positive for coronavirus
4 Will Covid-19 force Primark to rethink decision not to sell online?
5 Interim examiner appointed to food distribution companies
Real news has value SUBSCRIBE