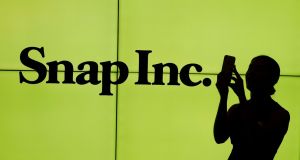 Snap: some remain cautious on the prospects for the loss-making company. Photograph: Reuters

As many as 9 million people rushed to sign up to Snapchat, the vanishing messaging app, in recent months to see what their face might look like if they were a baby, using its new, sophisticated photo filter.

But where users are opting to return to the smooth cheeks of their youth, Snapchat itself has experienced a coming of age.

Shares in Snap, Snapchat’s owner, jumped more than 10 per cent in after-hours trading on Tuesday after the Los Angeles-based company announced bumper second-quarter results, shocking Wall Street analysts who had already rushed to upgrade their ratings in recent weeks.

At $388 million (€348 million), revenues came in well above consensus estimates, and the company added a record 13 million users in the quarter, the majority of whom were wooed by the photo filter features.

The results mark a dramatic turnaround in fortunes for a company that last year was plagued by several abrupt executive departures, numerous product mishaps and a sinking share price.

“Everything that could have gone wrong last year did . . . It was probably the most hated name for investors,” said Brent Thill, managing director of the internet research team at Jefferies. “Now it is becoming one of the most loved names and for the right reasons - the fundamentals are improving.”

But some remain cautious on the prospects for the loss-making company, warning that the quarter represents just one data point and questioning whether Snap’s viral prowess and revenue growth is sustainable in the longer term.

“If you look at just this quarter as the beginning of a trend then yes, [the Snap bulls] are right,” said Youssef Squali, an analyst at SunTrust Robinson Humphrey.

“But this is a very fluid market, the competition for ad dollars is pretty intense and this is a management team that has zigged and zagged over the past couple of years,” he added. “They have not given a performance that gives you a warm, fuzzy feeling.”

Snapchat, which offers private messaging and cutesy photo features to its largely millennial and younger Generation Z audience, floated in March 2017, surging 41 per cent on the first day of trading from the $17 issue price to open at $24.

But the stock has not returned to that level since that day, disappointing investors, some of who have launched legal action against the company, and attracting short sellers in droves.

Last year was particularly painful. The company suffered high senior executive turnover amid infighting, a botched product redesign, product delays and rising fears of an exodus of users to Instagram, which has mimicked a number of Snap features including its disappearing “stories” videos and is owned by its deep-pocketed, larger rival Facebook.

User growth stalled, and the shares became hostage even to fickle celebrities: when model and social-media influencer Kylie Jenner tweeted in early 2018 that no one opened the app any more, some $1.6 billion was wiped from the company’s valuation.

Evan Spiegel, Snap’s chief executive and founder, has cast 2018 as a humbling learning curve for himself and the company. Now, however, recent efforts to address governance issues and ramp up investment in the group’s advertising offering have begun to pay off, experts say.

Only nine months ago, “you didn’t have as much process and structure in the sales organisation,” said Michael Levine, senior analyst at Pivotal Research. “It was pretty much the Wild West. [But now] you’ve got a ton of opportunity.”

Mr Levine points to Snap’s move to work more closely with advertising agencies and develop a self-service ads business to make it easier and cheaper for small and medium-sized businesses to place commercials, bringing it more in line with existing, more mature platforms such as Facebook

The company also this year launched Snap Select, a premium service that allows brands to buy ads in its most popular video shows and the Snap Audience Network, which allows apps to create adverts using its advertising format and post them outside of Snapchat.

Analysts also argue that the new augmented reality filters, including the baby filter, mark some of the company’s most meaningful innovations since it began. According to Mr Levine, one big internet company that tried to reverse engineer Snap’s technology failed. “This is huge what they did with lenses,” he added.

Other new features, catering to its youthful audience, have been popular, including a new mobile gaming platform and the growing array of its online programming content, with stars such as actor Arnold Schwarzenegger and tennis player Serena Williams recently signed up.

Looking forward, the company has hinted that it may explore more opportunities for ecommerce and direct shopping on the platform, at a time when rival Instagram has signalled its intention to move into the space.

Jeremi Gorman, Snap’s chief business officer and a former Amazon sales executive, said during Tuesday’s call with investors that the company was “committed” to ecommerce, citing several initiatives including a move to allow influencers to launch their own stores.

Such a shift may reveal more starkly the impact of ads on this younger demographic. “The big question is, are they influenced by the advertisement on this platform?” said Mr Thill.

Analysts are eyeing whether the company can deliver on its target of profitability by the end of the year. According to Mr Squali, this is within reach thanks in part to successful “cost containment”: the group posted a net loss of $255 million in the quarter, compared with losses of $353 million in the same quarter of 2018.

But while Snap boasts that its ads are served to 90 per cent of all 13 to 24 year-olds, many analysts argue there are limits to its trajectory due precisely to this demographic focus.

“If they innovate what that product experience is, they can always find new users,” said Brian Wieser, global president of business intelligence at GroupM. “[But] I don’t know that a novelty feature would ever cause you to go from being a niche platform to a widely used ubiquitous platform.” – Copyright The Financial Times Limited 2019