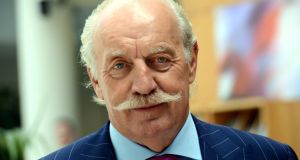 Dermot Desmond has bought €3.9 million of new shares in Datalex, which has increased his stake from 26.4 per cent to 29.9 per cent, just below the level that would trigger a mandatory takeover offer.

US asset management giant Capital Group has flogged its almost 7 per cent stake in Datalex after the beleaguered travel retail software group warned this week it will have to suspend its shares as it misses a regulatory deadline to file its full-year results.

However, Dublin-based businessman Nick Furlong’s Pageant Holdings saw an opportunity in Datalex’s depressed market value to snap up stock, declaring in a stock exchange filing in recent days that it has built up a 3.99 per cent stake.

Pageant, which at one stage had a 12 per cent interest in Datalex, slashed its holding in the first half of 2017 – a year when Los Angeles-based Capital was actively buying into the Dublin-listed company.

The latest movements took place on Tuesday, after Datalex revealed its shares will be suspended from trading on May 1st as the company misses an end-April deadline to publish its latest annual figures under market transparency rules. It is understood that the report will not be published until the middle to the end of June.

Datalex’s shares slumped by as much as 26.5 per cent to 61c on the day of the news. All told, they have plunged by 75 per cent since the company warned in January that it expected to post up to a $4 million (€3.6 million) earnings before interest, tax, depreciation and amortisation (ebitda) loss and disclosed suspected accounting irregularities, that have since been confirmed.

Shareholders in the troubled company are set to gather in Dublin on Friday afternoon to vote on plans by its main investor, Dermot Desmond’s IIU vehicle, to give it a €6.14 million, 18-month loan at an annual interest rate of 10 per cent to shore up its finances.

The funds are part of a wider package that has also seen Mr Desmond buy €3.9 million of new shares in Datalex, which has increased his stake from 26.4 per cent to 29.9 per cent, just below the level that would trigger a mandatory takeover offer.

The company confirmed last month that an outside review by PwC into its finances identified “significant accounting irregularities”. It found that Datalex failed to apply certain accounting standards and incorrectly recognised about $3.5 million (€3.1 million) of service revenue and $2.9 million (€2.6 million) of other revenue in the first half.

PwC also found that there were “material weaknesses in the internal control environment” with the accounting process largely manual and dependent on individual judgment.

Much of Datalex’s accounting issues for last year relate to its accounting for service revenue on a project to overhaul German airline Lufthansa’s digital commerce offering, which had gone way over budget and missed key deadlines. A company is allowed by software accounting rules to book revenue on such contracts based on the estimated stated of a project.