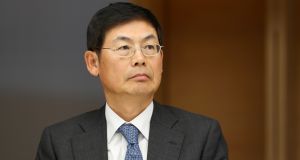 Samsung Electronics board chairman Lee Sang-hoon was was sentenced to 18 months in jail on Tuesday. Photograph: Seong Joon Cho/Bloomberg via Getty Images

Samsung executives and employees were, to different degrees, involved in finding out sensitive information about union members to convince them to leave the union, inducing the closure of subcontracting firms with active unions and delaying negotiations between labour and management.

“This is a further signal of change for South Korean judicial system, which previously gave lenient sentences to convicted businessmen,” said Park Sang-in, a professor at Seoul National University.

Samsung’s new leader, Jay Y Lee, needed to “build industrial relations which are in line with global standards,” he added.

The verdict follows last week’s ruling by the same court that gave a 16-month jail term to Samsung Electronics vice-president Kang Kyung-hoon on charges of union-busting activities at a different Samsung affiliate.