S Pen is the standout feature of new Samsung Note 9 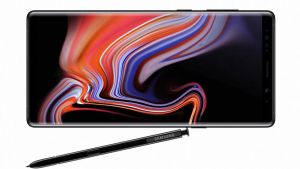 When the Samsung Note was launched in 2011, it was an oddity in the smartphone market, a mammoth phone in a sea of compacts. But it found a market and created its own category – and forced other phone makers to follow it.

Then there was the Note 7 battery disaster that cost the company billions when it recalled and scrapped the phone. There was speculation that Samsung would ditch the Note brand altogether as a result, fearing the company could never shake off the association.

But along came last year’s Note 8 and with it a new lease of life for the smartphone. The one problem? The battery. Samsung took no chances and the Note 8 shipped with a 3300mAh battery. It wasn’t the worst performing – it reliably got through most of a work day with reasonable use – but any heavy duty users would feel the power pinch.

So it is reassuring to know the first thing that the Note 9 addresses is battery life. The new phone has a 4000 mAh battery inside, despite being a relatively similar size to its predecessor. There’s a definite bump in battery life when using it throughout the day. And at a push, you can put it into battery saving mode, which bumps the Super Amoled screen down from quad HD and shuts off some non-essentials, eking out the battery life.

But aside from the extra power, Samsung has also built in some smart technology that will detect when the battery is being too heavily loaded and adjust performance, along with a new water cooling system that will help keep excess heat under control. Plus the handset is still IP68 rated, which means it will resist dust and water.

On first glance, you won’t notice any major differences between the Note 8 and 9, unless you opt for one of the more eye-catching colours. Everything is in more or less the same place, and looks the same size – the display is 6.4 inches versus 6.3 in its predecessor, but try telling that with the naked eye – until you flip the phone over. The fingerprint reader now sits in a far more convenient location, below the camera instead of alongside it. You are less likely to smudge up your camera trying to reach it. You could skip the fingerprint reader altogether and go for Intelligent Scan, which uses a combination of your face and your irises to recognise you. It failed one time out of about 20, when the light was poor, but for the most part it worked well.

The S Pen is what makes the Note stand out from the Galaxy S9 and its competitors. It’s a stylus but not just a dumb point and select stick. The S Pen has always had more functions, such as taking notes, creating gifs, translating chunks of text you select with the pen and so on. It can even be used as a drawing tool with a pressure sensitive nib. But Samsung has supercharged it in more ways than one for the Note 9. First, it now features Bluetooth. The previous pens worked on an electromagnetic basis; bring them close enough to the screen and it triggered the menus. Bluetooth sets the S Pen free – or at least within Bluetooth’s 10 metre range – and now controls things like video playback, photo galleries, taking photos, and presentations. It even raises your selfie game, by saving you the contortions that usually accompany the photos and allowing you to use the S Pen as a remote. You need to charge it after about half an hour, but it takes 40 seconds, so we’ll let it pass.

Speaking of the camera, it is the same tech as the S9+, but Samsung has made it smarter. Now you’ll get a warning if someone blinks, or moves so the photo is blurred. It’s doesn’t work every time though, so human intervention is still needed.

There was a big deal made of the Note 9’s gaming ability, but realistically, that’s going to be a “nice to have but not essential” for this phone’s customer base. But with a large screen and fast processor, it will be great for all entertainment – video streaming, gaming, reading ebooks – as well as working.

The screen is just as good as the Note 8, the camera is as good as the S9+, and the battery life is noticeably improved. Add in the new functions for the S Pen, including the ability to control presentations with the Bluetooth-enabled pen, and the elimination of the extra Dex dock, and you have a phone that gives you the best of most worlds.

The Note is never cheap, and the €950 being charged by networks to buy the Note 9 on prepay may seem a little steep. But the Note 8 was a similar price, and the base storage has been doubled from 64GB to 128GB. If you are after the 512GB version, that will cost a little more and doesn’t seem to be an option for now with Irish networks.

The Note 9 includes fast charging – with a compatible charger – and the ability to charge the device wirelessly. Plus it has expandable storage, and the version we had for review was dual sim, although it’s not clear if that is standard.

Samsung’s best Note yet, and also it’s longest lasting. Is it enough of a jump to push Note 8 users to upgrade though?