The Force is strong with Propel’s Star Wars Battle Quads

Review: You don’t have to be a Star Wars fan to enjoy speeds of up to 56km/h 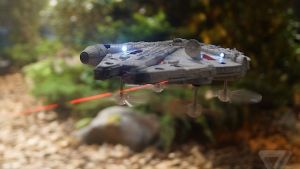 A few years ago, the idea that we would all be enthusiastically spending our cash on drones – whether for fun, photography, or commercial purposes – was one that probably seemed a bit far fetched to a lot of people. But look where we are. Toy drones are becoming increasingly affordable and therefore more appealing; the high-end photography drones are finding fans among amateur and professional photographers alike.

An indication of their popularity should be the fact that the Irish Aviation Authority had to release updated guidelines for the use of drones last year, telling people where they can and can’t use them – hint: not over crowds of people, in restricted airspace or more than 300 metres away from you – and included a registration for drones over 1kg in weight.

It kind of takes a bit of the fun out of it if you’re just an amateur users, although if you can find a remote enough area, you can have a bit of fun in peace.

The Star Wars Battle Quads, made by Propel, don’t really fall into the “just for fun” category, since they are slightly on the expensive side. Nor do they have a camera attached that would make them useful for photography. But that doesn’t mean they’re not actually fun; the Propel quads are built for racing. And laser battles – don’t forget the laser battles.

At the moment, you can buy three types: a T-65 X-Wing Starfighter, the Tie Fighter Advanced X1 and the 74-Z Speeder Bike.

The review model here was one of the first batch: a limited edition Tie Fighter. A lot of effort has gone into the details on the devices. It starts from the minute you open the box. Take the lid off and you’ll see the drone nested inside a display case. But as soon as you start to raise the lid, you hear clips from the movie soundtrack – music and dialogue – along with an impressive light effect that makes it seem like you are handling something very special.

And you are. The drones themselves are handpainted, which sets them apart from the usual mass produced toys.

Inside the box you get the drone itself, the controller, chargers, a training cage and some spare bits.

There is a reason why they include those last two. The Star Wars Battle Quads are capable of hitting speeds of up to 56km/h. Yes, you read that correctly. And believe me, you don’t want your limited-edition toy hitting your kitchen wall at that speed. I’ve snapped propellers off bigger drones doing less (see our previous review of the 3DR), so it made me understandably nervous.

There’s a bit of a learning curve to using the drone too, so there were more than a few mishaps until (after reading the instructions again) we found the beginners mode. That gives a virtual ceiling and floor, and if you pair it with the training cage to protect your propellers, it’s hard to do too much damage.

There are three speed settings on the quad: slow, medium and high. The default – luckily – is set to slow, so any mishaps won’t be completely devastating.

To get the most fun out of this, you really need two so they can not only race each other but take part in laser battles. But you’ll also need a lot of space for that, and the ability to distinguish the front from the back of the ship, which is harder than you think.

The Tie Fighter has auxiliary and infrared weapons, but everyone has to use the same set for the battles to work – ie you can’t battle someone using auxiliary weapons if you are set to IR weapons. You can battle with up to 23 friends, and each time you are “hit”, you lose a bit of life, indicated on the controller. Again, there’s attention to detail: sound effects, lighting effects. Three hits and you will autoland, putting you out of the competition.

Anyway, our advice is to get to grips with flying before you even think of going there.

The fun factor. While the battle quads are a bit more expensive than your average toy drone, the laser battles are a key addition that will grab Star Wars fans. The speeds they can achieve are pretty impressive too; just make sure you have plenty of space. Battery life isn’t stellar: about seven minutes of flying time from a full charge, but propel has included two batteries rather than one, so thumbs up for that.

There’s a steep learning curve, and the initial set-up is a bit of a pain but once you get it down, you’ll be flying these drones like a pro.

For the most fun you’ll need at least two of these, and with an RRP of €240, that’s going to get expensive.

The sound effects on the box cycle through a few different options, so it’s not the same thing every time you open it. The whole package is presented well; serious thought has gone into this, which is nice to see.

If you are a fan of the films, you’ll love this (and I did). If you’re not but like drones that race and do cool things, you might still find yourself tempted to invest.