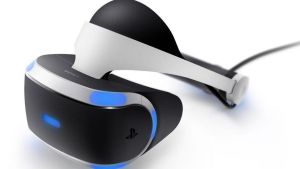 Sony PlayStation VR headset: If you have already bought a PS4, plus the Move controllers and Camera, you just have to buy the headset. At €400, it’s not cheap, but it’s considerably less expensive than its rivals

There is something seductive about virtual reality. With one device, you can transport yourself under deep oceans, explore distant planets or put yourself behind the wheel of a speeding car. You never have to leave your livingroom, and best of all, there’s no real risk that the shark attack will leave any sort of lasting damage on your person – unless you accidentally trip over something you’ve left lying around in the middle of the floor.

However, unless you’re going for a mobile headset, getting started with VR can be expensive. That’s where PlayStation VR has stepped in. If you are looking for an introduction to the world of virtual gaming, it’s not a bad place to start.

For one thing, it’s accessible. If you already own a PlayStation 4, it’s far cheaper to buy the PlayStation add-on than invest in a new computer to run the HTC Vive or the Oculus Rift, and also have to shell out for the headset.

You will, however, need the PlayStation Camera and the Move controllers, so if you haven’t already bought them, they are added expenses to factor in. The camera tracks the headset through a series of lights on its front and back, and the whole shebang is linked to the console through a series of cables and processing units.

To get rolling, you’ll need a PlayStation 4, the headset, the camera, the Move controllers and a dual shock 4 controller. That’s a lot of kit to keep track of but once the initial setup is done, it’s straightforward to get everything going the second or third time. Headphones aren’t strictly necessary but do make things a bit more immersive.

There are plenty of games to choose from too. A demo disc included with the headset allows you to try out a few options before you commit to any titles. Plus, Sony is offering other downloadable content – some of it free – through the PlayStation network. Want to be Batman? You can don the Dark Knight’s cape in Batman Arkham VR. How about a London robbery? London Heist is the game for you. Want to take out some murderous clowns and shoot at pigs in a twisted funhouse? That would be Until Dawn: Rush of Blood.

But how does it actually feel? The headset itself is lightweight, and there isn’t a velcro strap in sight. It adjusts to your head with a dial that tightens the hard plastic strap, and you can even wear glasses underneath it, which is an advantage over other devices.

The headset didn’t always seal out light effectively though, which was disappointing. Also, one tip: breathe through your mouth. I found the eye pieces fogged up if I tried to breathe regularly, and it will drag you out of the VR world with a bang.

Another issue to be wary of is the aforementioned cables. Lots of them. They occasionally act as a drag on your movement, especially if you are on your feet rather than lounging on the sofa.

The most important aspect about the Sony experience though is that it’s fun. One of the things about virtual reality is that it can be a bit of a one-person show: one person, one headset, not much interaction with the rest of the world. The Playstation VR also allows others in the room to see what’s going on in the virtual world, and in some cases join in. For example, the PlayStation VR Playroom – a free download from Sony – puts you in control of mini robots, while the VR-headset wearing player is a monster trying to destroy the city. It’s far less boring than simply watching someone else play a game for hours on end.

The Playstation VR headset can also be used as a cinematic viewer, thanks to its 5.7 inch OLED display, so you can play non-VR games or even watch Netflix on your own personal viewer, if you feel the need. At a resolution of 1920x1080 pixels, it’s not the highest resolution display among the three main contenders but it certainly feels high-quality enough.

As far as full VR systems go, the PlayStation VR is more accessible than others, simply because it’s less expensive. If you have already bought a PS4, plus the Move controllers and Camera, you just have to buy the headset. At €400, it’s not cheap, but it’s considerably less expensive than its rivals.

The motion tracking on the controllers isn’t great. That’s mainly because the system is limited to the PlayStation Camera, which has a single camera and doesn’t deal with too much moving around that well.

The PlayStation VR doesn’t need a huge amount of space for most games. In fact, you’ll play a lot sitting down.

PlayStation VR is an easy way into the world of virtual reality gaming – once you get to grips with all the controllers and cables.

1 In this strangest of recessions, what happens next for Ireland?
2 Michael O’Leary is the boss you want to lead an airline out of crisis
3 Bank of Ireland sees about 2,000 staff apply for voluntary redundancy
4 Estée Lauder staff at Dublin airport plan further strike action
5 Best Covid-19 ‘influencers’ will avoid hectoring
Real news has value SUBSCRIBE