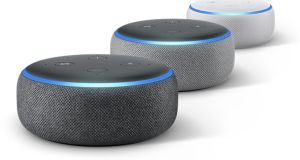 Amazon’s Echo Dot. Revenue staff have been told off to turn off smart speakers or move to another room when discussing confidential work matters

Revenue Commissioners have urged staff working remotely not to discuss work matters near smart speakers such as Amazon’s Echo due to fraud risks.

In guidance sent to employees recently, Revenue said employees working from home due to the Covid-19 crisis need to be mindful about discussing confidential issues in the vicinity of such devices, which are also often called virtual assistants.

It urges remote workers that may have reason to discuss cases with tax agents to consider going into a different room to make calls, or preferably to unplug the device altogether ahead of time.

Revenue confirmed the advice surrounding smart speakers had been given to staff as part of detailed guidance that also covers the use of videoconferencing solutions such as Zoom and Skype, and reminders on data protection rules and ensuring the security of remote devices.

A spokeswoman for Revenue said the guidance reflects a recent recommendation from the OECD’s Forum on Tax Administration, following a virtual meeting on fraud risks and Covid-19.

“While the OECD have no evidence that any virtual assistants are making use of anything heard, it was flagged as a risk. As such, Revenue’s guidance reflects the recommended OECD/FTA mitigation approach on this matter,” the spokeswoman said.

Irish consumers have been among the most enthusiastic adopters of smart speakers by companies such as Amazon, Apple and Google.

According to recent figures from Strategy Analytics, 9.6 per cent of Irish households have a smart speaker with adoption jumping by 28 per cent in the first six months of 2019 alone. The research company expects half of all households here to have such devices by the second quarter of 2023.

While many consumers have largely seen them as helpful devices, there have been privacy concerns raised about them.

The Guardian revealed last year that contractors at Apple’s facility in Cork and at other sites across Europe, frequently listened to confidential information captured via Siri. The news led to the tech giant temporarily laying off 300 contractors working at its Hollyhill facility while the company undertook a review.

Amazon and Google have also come under fire over allegations that employees and contractors have eavesdropped on recordings made by virtual assistants, ostensibly to improve the technology.

All the major manufacturers have said they have taken steps to resolve privacy concerns.