It's time to ban websites from gathering our personal data 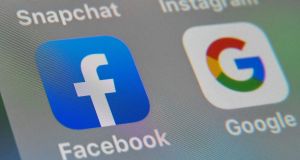 Australia announced this week that it will produce a regulatory framework requiring Facebook and Google to directly pay media companies more of the revenue the tech giants make monetising their content. Photograph: Denis Charlet/AFP via Getty Images

Media companies – the places that research and report on daily events in the world, creating what is now trivialised as “content” – have been under survival pressure ever since a new advertising paradigm emerged over a decade ago.

That’s the online surveillance advertising model in which endless forms of data on individuals is gathered online, and increasingly offline via “smart” devices and appliances, and aggregated into myriad marketable groupings based on every imaginable mix and match category. These database sets might offer advertisers “women dog-owners over 50 in Cork suburbs”, or “American gay men under 30 interested in sailing”.

Just about anything goes. Most of us haven’t a clue about how much data is gathered about us – which is reams of it [to use a quaint analogue metaphor] — and how we are then marketed globally, often in microsecond-long auctions that take place in between the time we land on a webpage, are identified by the cookies and the digital footprint we trail behind us, are classified, and, then, served an ad as the page loads. Yes, that fast.

The companies that are the surveillance titans in gathering, analysing and marketing either our information directly to third parties, or access to us – Google and Facebook, respectively – now control the vast majority [around 60 per cent globally, according to eMarketer] of the advertising market, a significant segment of it driven along by the “content” from journalists, which platforms don’t pay for.

A pittance of ad revenue

Either the ads go on the platforms themselves, or are served to us elsewhere, with these two as data broker intermediaries. Meanwhile, the media companies get a pittance of ad revenue share, and that share is already tiny for online ads compared to direct print or broadcast ads.

We all know where that has led us: company closures, shrinking newsrooms, and the loss in particular of local and regional news, and of global and investigative reporting, which takes time, money and expertise.

In one attempt to change this exploitative model, Australia announced this week that it will produce a regulatory framework requiring Facebook and Google to directly pay media companies more of the revenue the tech giants make monetising their content. In Australia, for every $100 spent on online advertising, $47 goes to Google, $24 to Facebook and $29 to everyone else, according to the final report this week from the Australian Competition and Consumer Commission, the basis for the proposals.

The decision has come at a critical time, with the coronavirus crisis battering media industry ad revenue further. Fewer companies are running ads, and those that are, are often choosing to avoid appearing alongside coronavirus coverage. So, media companies are in the bizarre position of having massive audiences for “content”, and little ability to translate them into desperately needed revenue.

Serve as a template

The Australian approach, which is of course opposed by Google and Facebook (who were supposed to come up with effective solutions but did not), will likely serve as a template elsewhere. Already, Cork MEP Billy Kelleher has said that Ireland should consider something similar, if Google and Facebook don’t come up “with their own proposals to help their traditional media colleagues.”

They won’t. The current financial tidbits thrown from their lavish table – newsroom initiatives and various reporting funds – place media outlets in an impossible, ethically warped position. Independent journalists should not be beholden to charity handouts from the surveillance capitalists, the very companies they report on, which have directly enabled the fake news universe while undercutting real news and its creators – simply to survive.

But is the Australian solution the best option?

It will require close examination and some bedding-in time to evaluate properly. It is certainly a good start in rethinking what we have all been incrementally slow-boiled into accepting as the norm (“free” stuff from companies like Google and Facebook, in exchange for secretive data gathering and exploitation).

A more radical and comprehensive approach would be to outright ban the surveillance capitalism model. Forbid personal data gathering. Allow ads, of course, but using only the most basic demographics, not highly granular detail. (Incidentally, there’s little hard, independent evidence that targeted ads even work, and we cannot fully know because the company algorithms and practices are so opaque.)

But there’s plenty of evidence of the damage this data-gathering-based surveillance-capitalism model does. It enables the easy spread of false and dangerous information, conspiracy theories, and threats. The format is easily exploited to perpetrate human rights violations, election fraud, and state control.

So why not just get rid of it?

Without any coordination beforehand – none of us had met before – this was actually the firm recommendation of every single one of us on the November expert panel that gave evidence before the Dáil and the global parliamentarians of the Grand International Committee on Disinformation and Election Fraud.

If surveillance capitalism were banned, it’s not just content creators that would have a better chance of survival. It’s democracy.