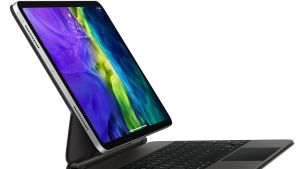 Apple’s Magic Keyboard: makes it easier to balance your iPad and tilt the screen to the perfect angle.

Calling anything “magic” is bound to ratchet up expectations. But Apple has form for this; it’s a regularly used adjective in Apple product launches, and graces a couple of its products – the Magic Mouse, for example. The Magic Keyboard has already made an appearance in the MacBook Pro and the new MacBook Air, and has been generally well-received. So how does it work with the iPad Pro?

You get the Magic Keyboard itself, which is nicer to type on than other keyboard cases, and a trackpad built in too, which takes advantage of the new trackpad compatibility in iPadOS. When you aren’t using that, it works well as protection for the front and back of your expensive tablet, and a USB C pass-through means you can charge your tablet through the case.

What’s unusual about this keyboard cover is the cantilever design, a new one for Apple’s tablet that makes the screen appear to float above the keyboard. It’s more than just a nice aesthetic though; it is sturdier and more reliable than any other iPad keyboard cover I’ve used.

It’s by far the easiest to type on, especially if you have to use it while on the move. That’s down to the cantilever design, which makes it easier to balance the iPad, and also to move the screen to the perfect angle. It doesn’t feel like it’s going to tip over without warning while I’m typing on my lap, something that used to be a frequent hazard.

The keys are backlit, making the keyboard easier to use in poor light. It’s a small thing that makes life a little easier.

I’ve been using the iPad Pro on the move for a couple of years, and the Magic Keyboard case is streets ahead of anything I’ve tried with the Pro. It essentially turns the iPad Pro into a usable laptop

The one issue that may be a sticking point, however, is the price. The Magic Keyboard isn’t cheap. It starts at €339 for the 11-inch version, and rises to €399 for the 12.9-inch version. That’s the cost of a regular iPad for a single accessory.

But anyone investing in an iPad Pro is already paying a high price for a tablet, about double Apple’s entry-level device. If your Pro is an important part of your work set-up, the keyboard would be a good investment.

Sturdy as a cover, great to use as a keyboard. The Magic Keyboard also allows you to adjust the angle of the tablet so it suits you best in terms of what you are doing – writing, watching video, doing a video call. With it your iPad Pro is now the closest thing you’ll ever get to a business laptop.

It’s an expensive piece of kit, and it adds a bit to the weight of the tablet.

The power pass-through is handy. It puts a charging port on the opposite side of the iPad, which is another small thing that makes life easier, giving you options when it comes to keeping your iPad powered up.

If you want to buy a keyboard cover for your iPad Pro, make it this one. It may be expensive but it is worth the price.