Remote working: why has it taken so long?

Arresting the spread of Covid-19 is behind the current surge in home-working, but it has many other benefits, both for individuals and the communities in which they live 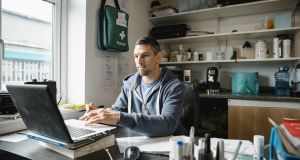 For some people, remote working is not an emergency measure, but a way of life, one that allows them to live in areas that are lower cost, and become part of a community, organising events, being part of the local GAA organisation. Photograph: iStock

Why has it taken so long for employers to embrace the idea of remote working? The current coronavirus outbreak and the measures put in place to help arrest the spread of Covid-19 has focused a lot of attention on how staff can work outside the office.

Indeed was the first company to ask staff to work from home, with Google following shortly afterwards. Apple and Vodafone Ireland have also been among the companies that have been moving towards remote working in recent days.

Then, on Thursday, March 12th, Taoiseach Leo Varadkar made his announcement: the schools were closed, childcare facilities were shuttered and anyone who could work from home was urged to do so. And so thousands of workers were suddenly thrown into a situation where they are working from home, potentially for the first time.

Remote working seems like the ideal solution. No commute each morning, no congestion to deal with – just a short hop to your desk and a lower risk of bumping into someone carrying Covid-19.

But for some people, remote working is not an emergency measure, but a way of life, one that allows them to live in areas that are lower cost, and become part of a community, organising events, being part of the local GAA organisation.

Grow Remote is one organisation that has sprung up in communities outside Dublin, offering support and tools for those who want to work remotely within their own community. It started with a WhatsApp group in 2018, and is now a volunteer group that spans 17 countries with more than 133 local chapters.

Founder Tracy Keogh said the idea came from a desire to support local communities and attract more jobs into the area.

“What we’ve realised over the course of time is that you’re patching over issues if you don’t look at it from first principles,” said Keogh. “The challenge in our towns is that there isn’t enough money coming in and staying in there, circulating within them.

Keogh said the turning point came when she Googled “remote work” and found a website with a couple of thousand jobs that could be carried out from their community.

“Remote is more than remote from Dublin; remote is fully distributed,” she said. “Why didn’t we know about these opportunities? The reason that we didn’t know is because they don’t come through jobs boards. They don’t come through local recruiters. They’re not at our local careers fairs. So we began to solve that.”

Grow Remote has seen serious growth since its foundation. Aside from its local chapters and overseas expansion, the organisation now offers a jobs board for remote workers, with Xerox, Lenovo, Shopify, Bredog, Glofox, Red Hat and GitHub among those who use Grow Remote to hire workers.

But being a volunteer movement with little funding to back it brings its own challenges. “It’s definitely challenging in terms of going deep enough. We don’t want to be in 17 countries and half-assing it. We prefer to be in one country delivering well,” said Keogh.

The organisation has raised some money. In January, the not-for profit secured €500,000 from the Regional Enterprise Development Fund, with matched funding coming from Social Entrepreneurs Ireland and the Western Development Commission.

The movement has a similar growth path to CoderDojo, the voluntary coding club movement that started in Ireland. Grow Remote has backing from some private companies and public bodies, but it has also made its way onto social entrepreneurship platform ChangeX in a bid to spread the movement further and get the necessary elements – infrastructure such as coworking spaces, broadband and connection platforms, community leaders and advocates, and resources such as education and funding.

“What ChangeX allowed us to do was to put everything that we knew into a box, kind of like an Ikea product. They get all of the instructions and get all the materials and they can build it up locally in whatever way they want to build it. Without ChangeX we would definitely not be able to run And there’s no way that we would have learned as much as fast,” said Keogh. “ChangeX is how we managed to scale the idea and it’s demand-led so people want to run it, they can just pick it up and take it. It’s very organic.”

While the current spread of Covid-19 is having a major impact on businesses, Keogh said understandably there has been a rise in interest in remote working. Much of this has come from corporates who previously didn’t have the technology in place. “From SMEs, it’s just about the employees getting familiar with a new way of working,” said Keogh.

There are challenges though. For others, they may fear the sudden surge in remote working – along with the increased load from video streaming services in an attempt to keep the troops entertained – will hit their internet connection.

Experts in the US have warned that office workers could swap traffic congestion for online congestion as more and more workers log in and swamp broadband networks. And in the United Kingdom, some experts have advised that Britain’s copper infrastructure may not be able to cope with the added burden of remote working, virtual private networks and video conferencing.

But Irish broadband providers moved this week to reassure customers there were no issues with their networks and there had been no notable strain on networks so far.

Virgin Media Ireland, which has about 378,200 broadband customers, said the coronavirus outbreak was a significant global challenge, but the company was “well prepared” both for its own workforce and its customers to work from home.

“Virgin Media places a priority on the health, safety and wellbeing of our workforce, customers and visitors,” a spokeswoman for Virgin Media said. “We have planned extensively and are well prepared to respond in a way that is both proportionate and responsible.”

Eir, which has more than 947,000 broadband subscribers and 730,000 fibre broadband connections, said its network would be able to stand the strain of extra home workers.

Ireland’s networks have been tested in the past, with extreme weather events such as Storm Emma and the “Beast from the East” forcing many workers to stay home for several days. The big test, though, will be if a large number of workers were accessing broadband from various providers while others were using data-hungry services such as video streaming.

But the current influx of interest is not necessarily a good thing for the remote working movement.

“This is a strange time for remote working. Most experts in the space think it could damage it,” said Keogh. “Remote working is much more than being told you need to work from home. There’s lots of noise in the space currently, and speaking to those who have been doing this in practice deliberately for years will help. There are tools and ways of working for every remote challenge.”

Make sure you have all the equipment you need

Broadband is top of the list if you have to access your office’s computer systems remotely. But aside from that, you’ll need a laptop or tablet, plus all the relevant software and apps that will connect you to your coworkers.

Some offices have a virtualised environment that you can access from anywhere through an app such as Citrix Viewer, but if you aren’t set up for that and need to access a single computer that can be left connected to a power source, look into software such as LogMeIn or TeamViewer that will give you remote access to your machine.

Get up at the regular time, get yourself ready for work and start at the usual time – keeping to a routine will help get you in the frame of mind for work.

That includes getting time away from work too – it’s tempting to skip breaks and lunches, but it is important to take some time away from screens for your mental health.

Have somewhere to work away from the family

This won’t always be possible, but if you can, having a desk to go to – and, more importantly, leave – every day helps mark out the difference between work and leisure time. It also means you can have time when you aren’t supposed to be interrupted. Or at least, in theory anyway. In practice, the closure of creches and schools means working parents will be juggling entertaining small children and work responsibilities.

Remote working doesn’t mean you have to be disconnected from colleagues. WhatsApp, internal messaging and team collaboration tools such as Slack and Microsoft Teams can help you keep in touch almost as easily as if you were at the next desk.

Working from home can mean the lines are blurred between work and leisure time. But if you find yourself at the laptop at 9pm answering emails having started at 9am that day, it’s time to step away. Turn off the laptop, silence email notifications on your smartphone and have some well-earned downtime. If something truly disastrous happens, they’ll probably ring anyway.

1 How to gift your child a house deposit . . . tax free
2 BOI customers to be charged twice with bank fees on New Year’s Eve
3 Irish designer of Oxford vaccine: ‘I’ve never worked so hard in my life’
4 Son putting elderly dad under pressure to sign over land
5 We continue to ignore massive pensions elephant in the room
Real news has value SUBSCRIBE