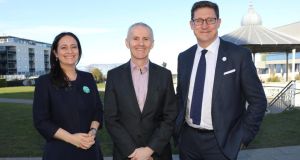 The Green Party has ratcheted up its criticism of the Government’s policies on climate change, ethics and sustainability at its national conference in Dun Laoghaire, Co Dublin.

The Greens have been regarded as the most collegiate and least adversarial of the State’s political parties but this weekend’s convention heard far more robust language when referring to Government Ministers, and Taoiseach Leo Varadkar in particular.

Speakers at the conference have argued that at a time of rising incomes, tough decisions should be made now to invest properly to reform the economy and create a sustainable future. The party, along with the Labour Party, has not advocated tax cuts in its pre-budget submissions.

There is no formal discussion on the referendum to repeal the Eight Amendment this weekend, as the party position on the matter is already settled and its members have been active on the Repeal canvass.

With an election expected to take place within the next year, the party has ambitions to increase its Oireachtas representation, which now stands at three (two TDs and one Senator).

It was also announced that the party’s candidate in next year’s European Elections in the Dublin Constituency will be Dublin councillor Ciarán Cuffe.

The former TD for Dun Laoghaire, who served as minister of state for planning, sustainable travel and horticulture when the Green Party was in coalition with Fianna Fáil, has maintained a high profile, particularly on transport and planning issues, and would be seen as a credible candidate for one of the three seats in the capital.

In earlier sessions, party chair Roderic O’Gorman set out the party’s support for directly elected mayors in Dublin and Cork, saying the prestige of the office allowed a Mayor make a huge difference in improving social conditions, something part-time councillors were not in a position to do.

Among the motions at the conference was on the appoint an independent State regulator for advertising on the grounds that self-regulating by the industry had not worked.

At a discussion on housing in the afternoon, Bríd McGrath from the social housing group Respond Housing told delegates that when social housing was proposed in a particular area, the local residents “freaked out”.

She said: “You cannot be on Joe Duffy giving out about a housing crisis and then object when a social housing project is proposed near you.”