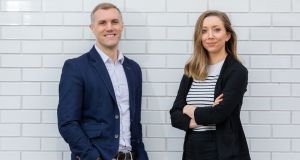 A build-up of fluid on the lung is one of the most distressing symptoms of advanced cancer. It affects about 50 per cent of patients and is currently treated by draining the fluid with a catheter. The problem with the procedure is that the catheter is invasive to insert and cumbersome to wear.

Pioneering advances in medical science are helping people to live longer, but there is a trade-off: a steady rise in the numbers needing palliative care. This is expected to double worldwide over the next 20 years and is driving the demand for new treatments to meet the needs of end-of-life care.

This was the starting point for Dr Michelle Tierney and Tim Jones who co-founded SymPhysis Medical in 2018 following their participation in NUI Galway’s BioInnovate medtech innovation programme. Participants come from multidisciplinary backgrounds, and Tierney and Jones were two of a four-strong team assigned to the area of interventional pulmonology. They spent two months in hospital settings in Ireland and the US looking at unmet clinical needs within the specialism and eventually decided to focus their attention on developing a product to improve the treatment experience for patients coping with fluid on the lung.

“When BioInnovate came to an end, Tim and I decided we wanted to take the idea further because we’re both passionate about developing patient-centric solutions that also meet a pressing clinical need,” says Tierney who has a doctorate in chemistry and a diploma in medical device science.

Prior to taking part in the BioInnovate programme she worked as a pharmacologist with clinical research multinational Icon. Her co-founder Jones is a materials engineer with a second degree in medical device innovation who worked with Medtronic as a senior research and development engineer before joining the programme in 2017.

“One of the big issues with existing catheters is that they don’t prevent the fluid from re-accumulating. This means many patients will have them in place for up to 12 months, which is often most of their end-of-life stage. It greatly diminishes their quality of life during this time and indeed many will die with the catheter still inserted.

“Secondly, patients will need to have the drain emptied two or three times a week for up to a year and in most instances, they will need help from a carer to do this,” Tierney says. “Our goal was to develop a device that drained the fluid in a more user-friendly way from the patient’s perspective but also prevented it from coming back. With our system, the aim is to remove the drain after four weeks. That’s a significant step forward.

“Many believe that palliative care means death is imminent, but that’s not the case. People can live well with palliative care for a long period of time and continue to enjoy their hobbies and physical activities,” she adds. “As such it’s really important for them to remain independent and we see RelEase contributing in this respect. If someone is fit enough to be up and about then they can likely drain our device without help. From a clinical perspective, very little training will be required to use RelEase as it’s very similar to current practices.”

The company’s RelEase catheter is patent pending and Tierney is limited in what she can say about how it works to protect the IP for now. However, she says it has an “active” component that speeds up the drying process whereas conventional catheter systems are passive and take much longer. They also involve a tube that has to be anchored with two incisions in the armpit and patients are constantly aware that the tube is there. By contrast, the RelEase portal has a single anchor point, it is discreet (no obvious tube) and has been designed for wearer comfort.

SymPhysis Medical is based at NUIG and is yet to reach spin-out stage but it has an MVP (minimum viable product) and has already conducted five successful pre-clinical trials. The project has been supported by Clare Local Enterprise Office and Digital Health Europe with commercialisation funding of €480,00 to date from Enterprise Ireland.

The next step is a €2 million fundraising round that will allow the founders to sign off on the final product, build out their team and put their device through the necessary regulatory hoops with a view to launching in the first quarter of 2023. The estimated value of the chest drainage market being targeted by SymPhysis is about $1billion (€850m) a year in the US and Europe alone. In human terms, this translates as about 625,000 patients annually who will need catheter intervention during their illness. The chest drain is the first application of the SymPhysis technology, but a second product to drain fluid built up in the abdomen as a result of diseases such as liver cancer, will follow.

Tierney says the pace of life in the start-up is hectic with multiple product, clinical, regulatory and business strands being juggled simultaneously. At present, the prototypes are being 3D printed and manually finished, but they are already drawing up product specifications and searching for a manufacturer while the founders are also working closely with clinicians to fine-tune the device.

Having nailed the functionality and design of their device, the founders are now looking at adding a smart element.

“Palliative care has been slower to get digital solutions than other branches of medicine and it is something we wanted to include,” Tierney says. “Part of the reason is that the type of patients we’re dealing with are vulnerable and anything that helps minimise their time in healthcare settings is desirable. Getting the hardware right for RelEase was the big challenge. Moving the smart aspect of the device forward will be easier.

“In some ways, people might consider what we’re doing to be niche, but it is estimated that three in four people in high income countries will need palliative care during their lifetime,” Tierney says. “Palliative care is often misunderstood mainly because people don’t think about it until it becomes personal. As a result, it has been somewhat neglected when it comes to innovative solutions. There is huge room for clinical improvements but also a need to expand solutions beyond treating the physical symptoms into supports that allow patients to remain independent and stay social for as long as possible.”