Company supplies Apple with technology for iPhone and watch 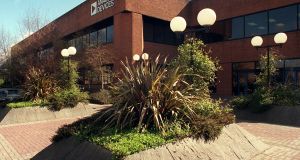 Accounts filed by Analog Devices International show revenue increased by 6.44 per cent from $3.78 billion to $4 billion in the 12 months to the end of November 3rd.

Pretax profits at a Limerick-based unit of US technology firm Analog Devices last year soared by 28 per cent to $346.9 million (€316.3 million).

Accounts filed by Analog Devices International show revenue increased by 6.44 per cent from $3.78 billion to $4 billion in the 12 months to the end of November 3rd.

Established in Ireland in 1977, Analog employs more than 1,200 people in Limerick. The company supplies Apple with technology for the iPhone and Apple watch.

The main factor behind the jump in pretax profit was $140 million in dividends received during the year.

The company paid out interim dividends of $440 million while subsequent to the year end the firm received dividends of $145 million.

“We enter the financial year 2019 better positioned than ever to grow profitably and gain market share over the long term,” the directors’ report said.

The profits take account of research and development costs of $372.6 million and combined non-cash depreciation and amortisation costs of $77 million.

Underling the economic importance of the firm to Limerick, the firm’s staff costs last year increased from $143 million to $151 million.

The firm recorded post-tax profit of $331 million after paying corporation tax of $15.24 million.

Employee numbers increased from 1,201 to 1,232 and a breakdown shows 585 are engaged in manufacturing, 450 in engineering, 149 in marketing and 48 in administration.

Last year at the firm, key management personnel made up of directors and other senior employees shared remuneration of $6.45 million and this was sharply down on the remuneration of $16.59 million paid out in 2017.

Directors’ remuneration last year totalled €2.36 million. A breakdown of the firm’s revenue show that $1 billion was generated in Europe; $1.16 billion generated in ‘Rest of Asia’; $828.4 million in China; $571 million in the United States and $372 million in Japan.

The accounts also confirm the contents of a previously disclosed public filing by Analog that it is challenging an assessment by the Revenue Commissioners here for €43 million ($52 million) over Revenue’s finding that Analog failed to conform to OECD transfer-pricing guidelines in respect of the 2013 tax year.

The company states it and its parent, Analog Devices, intend to vigorously defend the company’s position and have filed an appeal with the Irish Tax Appeals Commission. Analog state s that its transfer pricing is appropriate.