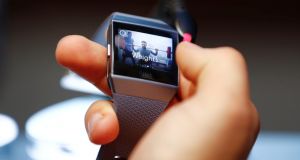 Fitbit began in the wearables industry by offering activity trackers, carving out a market for itself.

Fitbit is to launch a subscription service in Ireland that will offer users better insights into their health and fitness.

The company said the new service would answer the question of “what to do next” for users of its activity trackers.

Fitbit Premium, which is due to launch later this autumn, is harnessing the power of the data it has collected over the past few years – 228 billion hours of heart rate data, 202 trillion steps, 10.5 billion nights of sleep, 512 billion minutes of exercise, 42 million periods – to offer personalised insights.

“We’ve always felt it’s more than the device,” said Des Power, senior vice president with Fitbit and head of the company’s Irish operations. “It’s the app, the platform and services is going to be a huge part of it.”

The Fitbit premium membership will use your unique personalised data and build guidance and coaching to help you hit your goals.

Fitbit began in the wearables industry by offering activity trackers, carving out a market for itself. However, with the increase in competition in the smartwatch sector, the activity tracker market has become more difficult.

The research, from P&S Intelligence, said the market was being driven by advancements in the wearable technology, growing adoption of AI-supported wearables among consumers, increases in per capita income, and a focus on a healthy lifestyle.

The sleep tools will be among the first to roll out, offering guided sleep programmes and a sleep score breakdown.

The device uses the phone’s GPS rather than one built-in, meaning users will need to carry their phone to accurately log routes while running.

The Versa 2 also includes contactless payment service Fitbit Pay, which is supported by AIB and KBC in Ireland. The company is also adding Spotify to the Versa 2, which was the number one requested feature by users, Fitbit’s Helen Reidy said. There are now more than 3,000 apps and clockfaces for the Fitbit platform.

The watch is also trading on its battery life, which lasts for five days; using the always-on display though will reduce that to two days.

The Versa 2 will be available from mid-September for just under €200.

Fitbit has also unveiled a budget-friendly version of its smart scale. The Aria Air is bluetooth rather than wifi-enabled, and connects to your phone to share your weight with the app, calculating your body mass index. Due to launch in October, the scales will cost €60.