Company ‘has performed in line with expectations’ 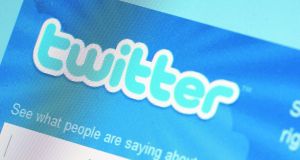 According to its latest accounts, the loss is linked to costs associated with Dublin-based Twitter International Company completing a €7.9 billion purchase from a connected company for the intellectual property (IP) rights to develop and maintain Twitter operations in all countries excluding the Americas.

The main costs affecting the Dublin company from the deal are the non-cash amortisation of intangible assets totalling €263.7 million for last year.

The accounts show that since the start of this year, the Dublin company issued share capital totalling €8 billion to settle amounts owed to group undertakings from the IP deal.

Last year revenue at Twitter International Company increased by 2 per cent to €1.024 billion.

The directors said the company had “performed in line with expectations” and they were “confident of the future long-term success of the company”.

According to the accounts, a rise in advertising revenues was driven by increases in monetisable daily active users, ad pricing and the number of ads shown.

The revenues enjoyed by the Dublin unit represent 35 per cent of Twitter’s global revenues of $3.46 billion last year.

The social media firm has been based in Ireland since 2011. Twitter Ireland is led by managing director Sinéad McSweeney.

Staff costs increased by 26 per cent from €20 million to €25.2 million, including share-based payments of €3.66 million.

The amount of revenue the business generates from its Irish users is not disclosed. Singer Niall Horan has the highest number of followers of any Irish person, with 40.7 million, and Conor McGregor and Rory McIlroy also have millions of followers.

The company last year received a corporate tax credit of €22.95 million, resulting in a post-tax loss of €216.7 million.

On the company’s future developments, the directors said they were “committed to making Twitter safer, and we are clarifying our policies, improving our enforcement and communicating more clearly”.

The accounts also confirm that the company is the subject of inquiries by the Irish Data Protection Commission over its compliance with GDPR.

On the impact of Covid-19, the directors state that the pandemic is “expected to continue to disrupt and harm our business, financial condition and operating results”.

The profit takes account of foreign exchange losses of €4.3 million, non-cash depreciation of €1.9 million and operating lease expenses of €5.1 million.

The subsidiaries of Twitter International Company include Twitter firms based in the UK, France, Holland, Germany, Spain, Australia, Italy, Mexico and Asia Pacific.