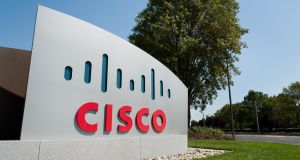 The failure to mount a more effective battle against Covid-19, particularly in the US, has dented the outlook for a key part of the IT market, networking equipment company Cisco Systems has warned.

“I wouldn’t say that we’re coming out of the coronavirus right now. It feels to me very much how it felt 90 days ago,” Chuck Robbins, chief executive, said on Wednesday.

Speaking in an interview with the Financial Times, he added that he had expected the battle against the pandemic to be showing results by now, but that US lapses had left a cloud over his company’s prospects.

“It sure feels like a coherent, nationwide testing programme would have been welcome,” he said.

Mr Robbins’ comments came as Cisco indicated that its current fiscal quarter, which runs to the end of October, might produce an even bigger drop-off in sales than it experienced during the sharp contraction of the most recent three months.

The downbeat prediction added to growing unease on Wall Street about a broad downturn in IT spending in the second half of this year, and wiped about 6 per cent from Cisco’s share price in after-market trading.

Cisco’s fiscal quarter runs to the end of July, a month later than most tech companies, making its results the most up-to-date window into broader IT market conditions. While demand for online services and software has soared during the pandemic, companies selling hardware such as servers, storage and networking equipment have faced a difficult market.

Mr Robbins suggested countries that have had the most success in controlling Covid-19 were seeing stronger IT demand. Japan, South Korea and Germany had all begun “to show some positives”, with the general outlook in Europe also improving, he said.

That was balanced by the US, where he said efforts to control the pandemic have been more patchy. “America’s really the wild card we’re seeing right now.”

The Americas region, which accounts for about 60 per cent of Cisco’s business, experienced a 12 per cent revenue drop in the latest quarter, compared to declines of 6 and 7 per cent in the European and Asian regions, respectively.

Responding to the prospect of a longer downturn than it had expected, Cisco on Wednesday said it would slice $1 billion from its annual cost base - equivalent to about 6 per cent of its operating costs - though it did not say how many jobs were likely to be lost.

It also said it was accelerating plans to sell all its products on a subscription, or “as a service”, basis, something that would reduce its vulnerability to sharp cyclical downturns in one-off product sales.

The company also said Kelly Kramer, chief financial officer, was stepping down after five years in the job, but would continue in the position while it searched for a replacement.

The pandemic hit Cisco’s core routing and switching business hardest, with sales falling 16 per cent in the latest quarter. Mr Robbins said the company was on the lookout for acquisitions to bring more cloud software applications to the company - a market that has been boosted by the pandemic, as many customers have moved more of their operations to the cloud.

For the most recent quarter, to the end of July, Cisco did better than most analysts had expected, though its revenue still dropped 9 per cent from a year before. Its revenue of $12.2 billion and pro forma earnings per share of 80 cents were ahead of the $12.08 billion and 74 cents that had been forecast.

Net income of $2.6 billion was up 19 per cent from the year before, when profits were dented by $667 million in one-off tax charges.

For the first quarter of its current fiscal year, Cisco said it was likely to record a further revenue decline of 9 to 11 per cent, pointing to revenue of between $11.7 billion and $12 billion, with pro forma earnings of 69 to 71 cents a share.

Most analysts had been expecting revenue of $12.25 billion and earnings of 76 cents a share.– Copyright The Financial Times Limited 2020

1 Air travel never going ‘back to way it was’
2 Bank of Ireland sees more than 1,400 staff apply for redundancy
3 Should I switch bank now with Ulster Bank at risk of closing?
4 BoI redundancies, ‘tax war’ warning for Ireland, and retailers in rent arrears
5 Coronavirus vaccine: 15 billion doses needed to inoculate the planet
Real news has value SUBSCRIBE