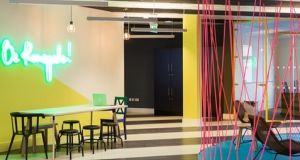 Dublin and London-based co-working company Huckletree has launched a campaign to encourage investors to address discrimination against women and those from ethnic backgrounds.

Huckletree’s “Fairer Funding Now” campaign comes on the back of new research that shows 28 per cent of female founders in Ireland and the UK feel they have been discriminated against when seeking funding.

In addition, just 17 per cent of black founders said they thought equal opportunities exist in funding circles, a figure that drops to 7 per cent among people with Asian backgrounds.

The new campaign, which is supported by Crowdcube, the largest crowdfunding platform in Britain, calls for greater diversity among start-up leaders receiving investment.

The company has raised £7.2 million from investors to date, including a £4.5 million round late last year.

“Fairer Funding Now is a rallying call to end discrimination in the fundraising process,” Aislinn Mahon, general manager of Huckletree Dublin told The Irish Times. To coincide with the campaign, the Dublin co-working space is holding an event series called “Speaking Out” to support women working in the start-up sector locally.

TechIreland, a not-for-profit that is based in Huckletree, earlier this year launched a campaign to increase the level of funding for Irish female technology entrepreneurs to more than €100 million in 2018.