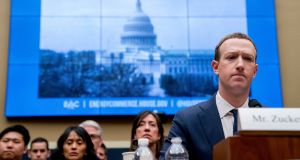 As Democrats reeled from Donald Trump’s shock victory in the 2016 US presidential election, thoughts soon turned to who could take on the Republican president in 2020.

One name that surfaced was that of Facebook chief executive Mark Zuckerberg. Speculation about the young executive’s political ambitions were prompted when he set off on a “listening tour” across the country, despite denials that he was mulling a bid for office.

In November 2017 Zuckerberg was summoned to Washington to testify before Congress. Under questioning by two Senate committees, the Facebook founder was probed about his company’s role in Russia’s interference in the 2016 election. Concerns about Facebook had surfaced earlier in the year when US intelligence services announced that Russia had tried to influence US voters. Zuckerberg initially dismissed suggestions of the company’s involvement as a “pretty crazy idea,” saying voters “make decisions based on their lived experience”.

It was a comment he would come to regret. In September 2017, as revelations emerged that a Russian-based institution had spent thousands on politically divisive ads on Facebook, he posted a statement on the platform apologising for the comment.

Zuckerberg’s fall from darling of the left to the target of political concerns about the power of tech companies reflects a shift in attitude in the United States towards social media giants.

Since the establishment of companies such as Google, Facebook and Twitter more than a decade ago, the United States has taken a laissez-faire approach to regulation compared with Europe. Fuelled by growing concern in countries such as Germany – a country acutely aware of the importance of citizens’ privacy given its history – the European Union moved quickly to regulate tech companies, not only in terms of user privacy, but also in the fields of competition and tax. Following years of negotiations in Brussels and Strasbourg, the EU’s GDPR (General Data Protection Regulation) entered into force a year ago, introducing sweeping new powers for consumers. Simultaneously the EU’s powerful anti-trust arm opened competition inquiries into companies such as Google, amid alarm about their dominance in the market. Google was hit by multibillion-dollar fines, while Amazon remains under scrutiny by Brussels over how it used third-party data to boost its own sales.

In the US, the attitude was very different, with regulators slow to question the models and motivations of the tech sector. In 2015 President Obama angered the EU when he suggested that EU inquiries into companies such as Google and Facebook were “commercially driven”. He implied that Europe was simply annoyed that its own companies were unable to compete with the US. “We have owned the internet. Our companies have created it, expanded it, perfected it in ways that they can’t compete,” he said.

Four years later, the attitude in the US is very different.

The first sign that change was in the offing emerged last year when California introduced a new privacy law. Modelled in part on the EU’s landmark GDPR law, the California Consumer Privacy Act is due to come into effect early next year. Under the regulation, consumers will be allowed to view the types of data collected by companies and request the right for companies to delete data. In addition, companies will be required to include an “opt-out” link conspicuously on their website, whereby users can request that their data is not sold to a third party.

Several other states are considering introducing their own version of the law.

The imminent introduction of the new regulations has sparked alarm among tech companies, and prompted a scramble in Congress to come up with a US-wide approach to privacy.

“Basically, the game was up in terms of ignoring tech regulation any longer. California’s law has completely changed the debate. The writing has been on the wall for some time that the US needs to do something when it comes to oversight,” said one policy official involved in efforts to introduce the new privacy law in Washington.

But tech companies’ enthusiastic support for the introduction of a federal law, and Washington’s apparent willingness to come up with a new regulatory system for tech companies after years of sitting on its hands, have prompted scepticism.

Many suspect that the reason for the new-found interest in regulating tech companies at a federal level is because industry is hoping that the new national rules will be weaker than California’s law.

Echoing what took place in the European Parliament four or five years ago, there is now intense debate taking place in Congress, and within the White House, about how far new restrictions on how companies handle data should go. Tech companies and consumer rights advocates are pouring resources into lobbying members of congress as they shape the most significant technology regulation in a generation.

The pressure on big tech companies has intensified in recent weeks. Democratic presidential contender Elizabeth Warren has called for the break-up of tech companies such as Amazon and Google, arguing that they harm competition by prioritising their own services on their platforms and buying up competitors.

Her proposal followed an explosive New York Times article by Facebook co-founder Chris Hughes in which he called for the company he founded with Zuckerberg to be broken up and more tightly regulated.

The woes of the tech giant have continued this month as the US Federal Trade Commission reached a $5 billion settlement with Facebook – the biggest in its history, though still a fraction of the company’s annual revenue. The regulator alleged that the social media company had eroded privacy rights and misused customers’ data to target advertisements. The justice department’s anti-trust division also announced an investigation into social media platforms to see if powerful tech companies were “engaging in practices that have reduced competition, stifled innovation or otherwise harmed consumers”.

Tech companies have hit back, arguing that too much regulation may allow Chinese competitors to muscle in on the sector, in ways that would be bad for democracy and privacy.

But the American public is reassessing its views on Silicon Valley for other reasons amid growing awareness that the rapid development of the US tech sector has brought downsides.

The greater San Francisco area is suffering from an acute housing crisis, with rents the highest in the country. Much of this is a side effect of the booming tech industry, with a new raft of Silicon valley IPOs slated for this year likely to push up prices even further. Amazon’s decision to pull out of a planned investment in Queens in New York after concern was raised by many local residents including congresswoman Alexandria Ocasio-Cortez, also suggests that American consumers are beginning to question if the relentless expansion of big tech is really benefiting them.

A continuing slew of negative headlines regarding the role of social media companies in promoting fake news is also contributing to the “techlash”.

The circulation of a doctored video purporting to show House speaker Nancy Pelosi slurring her words on Facebook and Twitter again highlighted the role social media companies play in online disinformation – a major concern for the US ahead of the 2020 election.

Concerns are not just emanating from the left. Trump, in many ways the master manipulator of Twitter, convened a “social media summit” at the White House earlier this month at which he berated social media companies for exhibiting liberal bias and silencing his supporters. Josh Hawley, a young Republican senator from Missouri, is bringing forward a new Bill that would remove tech giants’ protection from liability over third-party content.

Nonetheless, threats to curb the power of online giants are still likely to meet resistance in Washington.

At a Senate committee hearing in May, which was addressed by data-protection experts including Ireland’s Helen Dixon, several Republican members warned about excessive regulation as Congress mulls a federal law as an alternative to the Californian model.

“At the same time that we want to protect privacy, we want to avoid a regulatory system that imposes unnecessary burdens and that threatens jobs,” said senator Ted Cruz. Quoting research last year from the US national bureau of economic research, he claimed that Europe had lost up to 39,000 tech jobs due to GDPR.

Legislators will also be mindful of another aspect of American consumers’ relationship with tech companies. Technology giants have been driving the strong performance of the stock market, an upward trajectory that has benefited millions of Americans who own saving and retirement accounts. Many legislators will be loath to do anything to jeopardise that success. While the tide is turning when it comes to the regulation of tech companies, the coming months will be crucial in determining whether the change of perspective is here to stay.