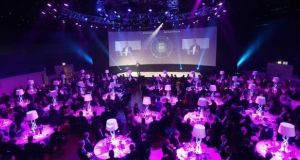 Video gaming group Keywords Studios, which has its headquarters in Ireland and is listed in London, has been named company of the year at the annual Technology Ireland awards in Dublin.

Keywords also took home the “outstanding achievement in international growth” award in recognition of its phenomenal growth in recent years.

The company, which provides a raft of services to the video games industry, was given the prestigious award at an event at the Mansion House on Friday organised by the Ibec-affiliated industry body, which represents more than 200 members.

Keywords was established in 1998 and now has more than 50 facilities in 21 countries, which provide services including software engineering, testing and customer care services. It provides services to 23 of the top 25 game companies, including Activision Blizzard, Electronic Arts, Sony and Ubisoft.

The company listed on the AIM in 2013 and has a market value of over €1 billion. In August it reported a near 40 per cent rise in first-half revenue to €153.2 million.

The other companies shortlisted for the overall prize at the Technology Ireland awards were Cora Systems, Fineos Corporation, Fenergo and Sidero.

The annual awards, now in their 27th year, seek to highlight successful entrepreneurship and the diversity of the Irish technology sector.

Dundalk-headquartered cybersecurity start-up Nova Leah, which is headed by Anita Finnegan, was named emerging company of the year, while Gerard Doyle, former Technology Ireland ICT Skillnet network manager, was awarded the person of the year prize.

Other winners on the night include Keelvar, Singlepoint, Cognizant and Version 1.

1 Basic income for all: Has the Covid crisis given us a new economic model?
2 ‘I don’t need to do any of this. . .I don’t actually need to work.’
3 Promontoria barred from pursuing doctor over Ulster Bank loan
4 Only way is up for Stripe as valuation skyrockets
5 How long can Government afford to keep State pension age at 66?
Real news has value SUBSCRIBE