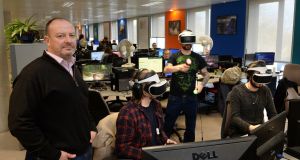 The Dublin-based game developer has purchased Studio Gobo and Electric Square (Gobo) for £26 million (€29 million) from its founders and other members of the management team.

Founded in 2011 by game industry veterans, Gobo employs 170 software engineers, artists, animators, game designers, quality assurance testers and producers. It provides game development services to video game developers and publishers around the world from three studios in Brighton and Hove in the UK. The company has worked on games franchises such as Disney Infinity, Ubisoft’s For Honor, and Microsoft’s newest racing game, Miami Street.

Keywords Plc, which is listed on the London stock exchange, said the acquisition “significantly increases” its access to the UK’s talent pool of video games developers, growing its total UK game development team to 220.

An analyst with Goodbody said the stockbroker expects Keywords to add €60 million per annum in deal flow as they further build their presence and become “more strategically relevant” to the top 25 global video game developers.

“The latest deal is Keywords’ eighth transaction in 2018 and brings overall spend to circa €53 million. We are confident that management is now likely to meet and exceed this target for 2018.”

Separately, an analyst with Davy said he expects Keywords to spend €75 million on acquisitions per year in 2018 and 2019.

Keywords is paying a total consideration of up to £26 million. The initial consideration is £10.5 million in cash and 254,529 new ordinary shares in Keywords, which will be issued on the anniversary of completion and will then be subject to orderly market provisions for a further 12 months.

The remaining consideration of £11 million is payable in a mix of cash and shares, or all in cash at the discretion of Keywords, subject to the achievement of a substantial increase in Gobo’s earnings before interest, taxes, depreciation, and amortisation (EBITDA) over the 12-month period following completion.

Underlying pro-forma EBITDA for the same 12 months is expected to be approximately £3.6 million.