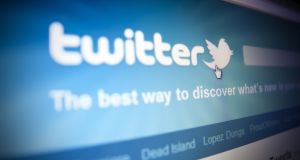 A statutory investigation into Twitter’s compliance with EU data protection law has been opened Photograph:iStock

A statutory investigation into Twitter’s compliance with EU data protection law has been opened by the Data Protection Commission after it notified a number of data breaches to the regulator this year.

The confirmation of the wide-ranging inquiry follows an announcement at the weekend that the commission has opened a statutory inquiry into Facebook’s compliance. Both multinationals have their European headquarters in Ireland and the commission is their main regulator for data protection in the region.

The commission told US media on Tuesday: “In November, the DPC opened a statutory inquiry into Twitter’s compliance with the relevant provisions of the General Data Protection Regulation following receipt of a number of (data) breach notifications from the company since the introduction of the GDPR.” The regulation became enforceable on May 25th and gives the EU’s data protection authorities strong powers of enforcement, including the power to prohibit companies from certain processing of personal data, and to issue substantial fines.

A statutory investigation into Facebook was confirmed on Sunday after the social media company announced in the previous days that it had discovered a bug that may have affected up to 6.8 million people who used Facebook login to grant permission to third-party apps to access photos.

The company said in a blog post that the problem has been fixed but that it may have affected up to 1,500 apps built by 876 developers.

The bug is the latest in a string of privacy problems the tech giant disclosed this year, including the massive Cambridge Analytica data scandal in April and a data breach of nearly 30 million accounts in October, which triggered a separate statutory investigation by the commission.

1 Suspicions rife as key Brexit trade talks begin in Brussels
2 Corona beer firm reeling after 8% slide due to coronavirus
3 Irish companies restrict travel over coronavirus fears
4 Life as a Facebook moderator: ‘People are awful. This is what my job has taught me’
5 Flight attendant seeks High Court injunction against Aer Lingus
Real news has value SUBSCRIBE