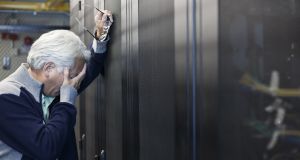 Forty per cent of respondents to Fujitsu’s survey were troubled by the phenomenon of “social anxiety and the role technology plays in promoting a more reclusive and less social lifestyle”.

In an era where technology is bringing us closer to driverless cars and robot servants, the majority of Irish people still feel a little uncomfortable at the prospect of a brave new world.

New research has found that, while Irish consumers are broadly positive about the improvements innovation brings to life, there are limits. Most feel ill-prepared to give their lives over to a society run by robots, artificial intelligence and algorithms.

A report published by Fujitsu, one of the world’s largest ICT companies, found that while 42 per cent of people believe technology to be society’s main driver of change, fewer than a third are “fully prepared” to meet it.

With innovation sweeping virtually every sector, a cultural shift may be required. Almost two-thirds of Irish consumers would not be happy about having illnesses diagnosed by AI doctors (62 per cent), and only one in five (19 per cent) would be comfortable with having their CV analysed by algorithm.

And, in an era where parents worry their children’s future jobs will be given to machines, almost half of respondents (46 per cent) would be uneasy about being served by a supermarket robot.

“To ensure the Irish public can keep up and embrace technology innovations . . . companies need to ensure that they are educating people and taking responsibility for bringing them on the technology journey with them,” said Tony O’Malley, chief executive of Fujitsu Ireland.

It is a familiar view. An Accenture report on tech trends this month found 81 per cent of Irish businesses believe companies need to create responsible AI products that make productive members of society.

For its own research, Fujitsu surveyed 521 consumers and 391 business leaders across a broad cross-section of retail, financial services, government and transport sectors.

It found that, while there was a generally positive view of technology, there were also concerns, chiefly around cyber security and crime, and the potential for “extremism”. Forty per cent of respondents were troubled by the phenomenon of “social anxiety and the role technology plays in promoting a more reclusive and less social lifestyle”.

There are positives too. More than two-thirds of people see potential improvements in education and new ways of learning and developing skills.

Confidence in future developments is important, particularly given the inevitable change it will bring. The Organisation for Economic Co-operation and Development (OECD) has warned that one in seven workers is likely to lose their job to automation in the coming years, amounting to 66 million workers across 32 developed economies.

This new round of automation is more likely to hit manufacturing and agriculture, as well as areas of the service sectors, including transport and food services.

“Young or old people can hardly recall a time when it wasn’t possible to search online for an answer in an instant, transfer funds, check account balances or research and book a holiday without the need for any expert assistance,” said Mr O’Malley.

“While all of these developments [allow] people to lead a more convenient and fast-paced lifestyle, there is a need for further education and focus on [comfort].”

1 Basic income for all: Has the Covid crisis given us a new economic model?
2 ‘I don’t need to do any of this. . .I don’t actually need to work.’
3 Irish start-up which developed facial recognition for cows raising over $50m
4 Only way is up for Stripe as valuation skyrockets
5 ‘Make plans but don’t hold on to them too seriously’
Real news has value SUBSCRIBE