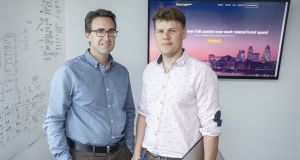 Irish travel software company Roomex has raised €8 million in a funding round led by Dublin and London-listed venture capital firm Draper Esprit. The company said it also intends to double staff numbers over the next 18 months to 100 employees.

Founded in 2006 by Jack Donaghy and Karl Glennon, Roomex has developed a dedicated hotel booking platform for business travellers, which is used by companies including Musgraves, Dairygold, Kepak, Mitsubishi and Muller.

Mr Donaghy said the new funding will be used to further develop the Roomex booking platform and to beef up its sales and marketing team as its looks to expand.

“Seventy per cent of our business is in the UK market and we want to accelerate that and then look at moving into other markets, both in Europe and further afield,” Mr Donaghy told The Irish Times.

The Roomex platform provides small and medium-sized companies with an easy way to manage their corporate travel. It currently serves more than 50,000 business travellers from across Ireland and Britain.

According to the company, the global travel market is worth €1.3 trillion per annum, of which about €300 billion comes from corporate hotel bookings. Despite the widespread disruption in the travel sector over the last 20 years, it still costs smaller companies a considerable amount in terms of time and expense searching for the best corporate rates and managing related expenses.

“The leisure play was the one that got animated early on with the likes of booking.com and Trivago all appearing to service that niche. At the other end of the scale, there are corporate travel agencies with the likes of HRG and Egencia doing the handheld service side of things, but smaller companies have typically been left out,” said Mr Donaghy.

“Businesspeople expect it to be as simple to book a room for work as it is in the leisure space but that typically isn’t the case. There are an awful lot of corporate hotels that you can’t get on the likes of booking.com, such as the Premier Inn.

“It is also hard for companies that have negotiated special rates with hotels to apply those when booking through most platforms, and there are also often reconciliation issues to resolve afterwards.”

Roomex is seeking to address this with its self-service platform. It seeks to provide the best hotel rates and serve up a single invoice for clients. The company, which has doubled the size of its workforce in the past 18 months to 50, has been ranked as one of the fastest growing technology companies in Ireland by Deloitte for the last three consecutive years.

Mr Donaghy said it was intending to double its headcount again over the next 18 months.

The new €8million funding round was led by Draper Esprit, with support from existing shareholders Frontline Ventures and Harmony Capital. Other backers of the company include Hostelworld chairman Paddy Holohan and CarTrawler chief technology officer Bobby Healy, who joined Frontline in a €3.5 million Series A funding round for Roomex in October 2016.

Nicola McClafferty, the former chief executive of online fashion retailer Covetique and now investment director at Draper Esprit in Dublin, is to join Roomex’s board following the fundraise.

“Being able to manage real-time bookings in an automated way with 650,000 hotels globally and then pool that into a single invoice and point-of-payment for the customer is extremely complex and Roomex is uniquely positioned to do that,” said Ms McClafferty.

“Other rival companies are digitising part of their operation but Roomex’s deep automation capabilities means that 99 per cent of all its bookings are done without anybody having to talk to another person. That to us means there is an opportunity to scale this globally,” she added.