After months of increasing scrutiny, tech companies, such as Facebook and Apple, have deleted content from right-wing provocateur Alex Jones. Video: The New York Times 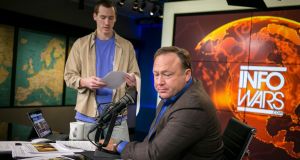 Controversial Infowars conspiracy theorist Alex Jones has been suspended from Twitter for up to seven days.

The suspension has put Jones into what Twitter describes as “read-only mode” preventing him from tweeting, liking or retweeting, but not removing his tweets or personal account from the social network.

A Twitter spokesperson said the action was taken for tweets containing a video that was in violation of the company’s rules on abusive behaviour and inciting violence. Twitter instructed Jones to delete the tweets, which he has done.

The New York Times reports that Jones tweeted a link to a video calling for supporters to get their “battle rifles” ready against media and others.

The move by the last remaining high-profile social network from which Jones has yet to be permanently banned comes after a tumultuous period in which Twitter’s chief executive Jack Dorsey has had to repeatedly defend the company’s position.

Dorsey and Twitter have come under criticism for not following suit and permanently removing Jones and his “verified” account with 889,000 followers from the service.

“We know that’s hard for many but the reason is simple: he hasn’t violated our rules,” Dorsey said last week. “We’ll enforce if he does. And we’ll continue to promote a healthy conversational environment by ensuring tweets aren’t artificially amplified.”

Since founding the far-right platform Infowars in 1999, Jones has promoted theories ranging from the government staging of the 9/11 attacks on New York and Washington to the left-wing faking of the Sandy Hook massacre where 26 children and adults were killed at the elementary school in Connecticut.

Two Sandy Hook parents have sued Jones, seeking at least $1 million (£770,000), claiming they have been subjected to harassment driven by his shows. Twitter is the last major host for Alex Jones’s rants. – Guardian Service

1 ‘The only time apartments were viable was in . . . Ballsbridge, Killiney and Dalkey’
2 Corona beer firm reeling after 8% slide due to coronavirus
3 Life as a Facebook moderator: ‘People are awful. This is what my job has taught me’
4 Covid-19: Aer Lingus parent cuts capacity, unable to provide guidance
5 Coronavirus: Wall Street joins global sell-off in worst week since 2008 crisis
Real news has value SUBSCRIBE