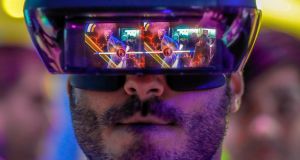 An attendee tries out the Lenovo augmented reality glasses at the Mobile World Congress in Barcelona in February 2018. Photograph: Reuters

Foldable phones and 5G will be among the key talking points at Mobile World Congress in Barcelona next week, the largest annual global gathering for the mobile industry.

Irish tech companies will be out in force again at the event, which typically serves as a launch platform for smartphones, smartwatches, tablets and other connected devices.

Samsung has tried to steal a march on its rivals this year by opting to unveil its latest Galaxy phones ahead of time at an event in San Francisco, but there will still be plenty of new products being announced by companies such as Huawei, Sony, Nokia, and LG.

The chief executives of Liberty Global, Cisco, Citi Orange, Rakuten, Sprint, Vimeo and Universal Music are all confirmed to speak at the four-day event.

The event, which takes place in the Fira Gran Via venue, opens on Monday although there will plenty of presentations taking place the day before.

Mobile World Congress, which is now officially known as MWC Barcelona, was established in 1987. This year’s event is expected to attract 107,000 attendees and more than 2,400 companies.

A number of companies will also have their owns stands, including Asavie, Ding, Openet, Taoglas and Alpha, while IDA Ireland will also be present at the event.

“Mobile World Congress is one of the most important mobile industry events globally. Reflecting Ireland’s strengths in this sector and the world-class innovation in evolving technologies arising from Ireland, there will be a strong Irish representation at the event,” said Mr Byrne.

1 Guinness brings out a non-alcoholic version of the black stuff
2 How long can Government afford to keep State pension age at 66?
3 Google's incredible power is the result of decades of regulatory failure
4 Frank Fitzgibbon stepping down as Sunday Times editor
5 Galway’s Aerogen plays key role in Covid-19 therapies
Real news has value SUBSCRIBE