C-Pen Reader Pen: A useful aid for students and dyslexics

The premise is simple: scan a line of text and it will read it aloud for you – and store it 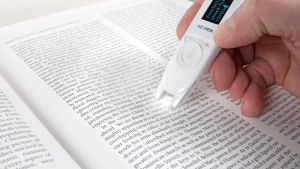 The pen itself is lightweight and portable – essential, given the nature of its use – and has a small guide on the “nib” so you know exactly where the text you’re scanning should sit

C-Pen Reader Pen
£230
Most technology fits into the “nice to have” category. It may make your life easier (or not, in some cases) but if it was taken away, you would cope. The C-Pen Reader Pen is potentially an essential product for people with reading or vision difficulties, reading printed text aloud simply by swiping the pen over a line or two at a time.

The Reader Pen has a simple premise: scan the line of text you are trying to read and it will read it aloud for you, in a human-sounding voice. It uses optical character recognition (OCR). A small OLED display shows the text the device has recognised before storing it in the pen’s memory.

There are two options for audio: the small, built-in speaker in the pen, or the included headphones. Either will work well, but if you are in a classroom setting, library or generally a public area, the earphones might be more practical to make sure you are picking up everything properly (and not annoying your neighbours).

In the box you get the device, a cable for charging it, a case for the pen and a set of headphones. The headphones are the earbud type, with silicon tips that can be swapped if the fit isn’t right. It seems like a small thing, but if this device is supposed to make your life easier, you will appreciate headphones that fit securely.

The pen has a couple of target markets: people with reading difficulties such as dyslexia, and those suffering from sight loss. As long as you can see well enough to use a highlighter pen to scan text, you can use the Reader Pen. Out of the box it recognises English (both American and British), French and Spanish. Italian and German come with the Exam Reader device that C-Pen also offers.

The pen itself is lightweight and portable – essential, given the nature of its use – and has a small guide on the “nib” so you know exactly where the text you’re scanning should sit. Get the text between those lines and you are good to go; this obviously rules out larger fonts such as headlines, however.

The pen is only as good as the quality of the material it is scanning. A few tests showed the OCR stood up to scrutiny, with a couple of glitches here and there. It did much better on plain backgrounds with clear text – an obvious advantage. But in general, the accuracy was quite good.

There’s another advantage to the device: because the pen stores the scanned text, you can export it later to a text file. If you need to grab a few lines from books or other printed material to include in an essay, for example, there’s no need to scrawl them down to transcribe later. Instead, you just scan the sentence or two required. It’s also a good way to bookmark text to come back to later. There is about 1GB of space available on the pen, and it can also be used for storing personal files. That is less of an essential feature these days when everyone has cloud storage at their fingertips, but if internet access is limited, you’ll appreciate the convenient backup.

The Reader Pen has a rechargeable battery, which lasts well and charges off microUSB. A single charge gives you hours of use, but the decision to use a common connection makes the whole thing a lot easier should you forget the charging cable and get caught out.

The Reader Pen is a bit of an all-rounder. Not only will it give assistance to those with dyslexia or vision difficulties, it will also allow users to record voice memos for replaying later, and store important files. There is a dictionary too that will provide definitions for words you scan.

If you need to read larger text – headlines in newspapers, for example, the Reader Pen isn’t large enough to take in the bigger font size.

The better the quality of the printed text, the more accurate the pen will be. Try not to make its job any harder than it has to be.

The ReaderPen is one of a number of of devices; a second one, Exam Reader is, as the name suggests, aimed at exam students or those with reading difficulties who are learning Italian or Spanish – one of the main differences is that it has no storage or dictionary, for obvious reasons – and the Dictionary Pen, which translates words and pronounces them for people learning a new language.

The reader Pen has proved its worth as a valuable assistive tool for those with reading or vision difficulties – as long as the text fits.
★★★★
scanningpens.com

1 Money matters: ‘My father embarrassed us with his haggling’
2 Opioid executive admits to ‘no morals’ ahead of prison term
3 Pilita Clark: When a rude boss keeps you waiting, why not walk out?
4 NI house builder apologises to Harry and Meghan over adverts
5 Comcast acquires Irish cloud-based telco Blueface
Real news has value SUBSCRIBE