VC funding for Irish tech companies falls by a quarter 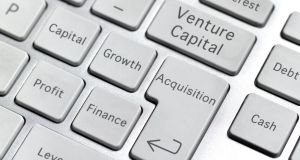 The amount of money raised by Irish technology companies fell by a quarter last year, dropping from €994 million to €740 million, new figures show.

Average deal size also declined in 2018, falling from €3.5 million to €3.2 million, according to the latest Irish Venture Capital Association (IVCA) survey. This was largely due to a decline in larger investments of more than €10 million, which were down 30 per cent versus 2017.

Investment in technology companies fell by 35 per cent in the final three months of the year, dropping from €177 million to €115 million.

Close to 40 per cent of all funds raised in the fourth quarter was by companies in the life sciences space. Software companies accounted for a quarter of all investment secured.

On a brighter note, seed funding jumped by 22 per cent to nearly €20 million across 50 companies in the fourth quarter.

“While the rebound in seed is encouraging, we need to ensure there is sufficient access to later-stage capital for those companies in the future as they look to scale and create more jobs,” said Sarah-Jane Larkin, director general, IVCA.

She added that the Irish venture capital community continues to be the main source of funding for tech companies both through direct investment and as the local lead investor for international syndicate investors who accounted for 50 per cent of the funding raised by SMEs last year.