Travacoin seeks €1.5m in funding to turn its product into fully working solution 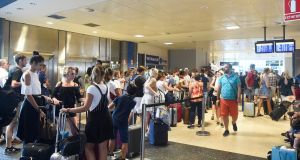 Travacoin founder Brian Whelan estimates the app could be up and running within six months if it can get funding. Photograph: Jose Jordan/AFP/Getty Images

An Irish start-up is using blockchain technology to ensure airline passengers are better informed and immediately get compensation or a refund when flights are delayed or cancelled.

Travacoin, a payments company founded by aviation industry veteran Brian Whelan, is looking to raise up to €1.5 million in funding to turn its minimum viable product into a fully working solution that would allow airlines to pay out digital tokens to affected passengers in the event of disruption.

The hope is that the new mobile app would be a win-win for everyone associated with passengers getting timely information and compensation straight away, airlines escaping the bad publicity that usually comes when flights are disrupted, and airports, hotels and retailers all gaining as travellers opt to spend their unexpected windfall locally once they have received their tokens.

It might seem like an impossible pipedream but Mr Whelan believes he can make it all work. “Airlines could contact passengers and inform them that they have both good and bad news. The bad news is the flight is delayed for a few hours but the good news is that we’re going to give you a couple of hundred euros in tokens right now. The result for passengers is that don’t have to fight with airlines to get compensation. Furthermore, they could also be offered discounts by other partners to encourage them to spend those tokens in or around the airport,” he told The Irish Times.

Travacoin, which is based at NovaUCD and is a recipient of grant funding from Enterprise Ireland, is currently in talks with a number of big-name airlines, airports, high-profile foreign-exchange focused companies and other interested parties over the solution, which would be based on blockchain technology.

Mr Whelan spent a decade working as a communications consultant to the Irish aviation regulator before setting up his own online service Airtaxback to help passengers recover unused taxes, fees and charges arising from missed flights. Through that business, he later joined forces with Airhelp. com, a service that recovers compensation for passengers whose flights have been delayed or cancelled.

He is the first to acknowledge that there will likely be heavy cynicism from passengers regarding the willingness of carriers to pay out compensation.

“Airlines have tended to be hugely resistant to compensating customers but that mindset has begun to change. This is partly because of the power of social media but even more importantly because consumers are more informed about their rights,” said Mr Whelan.

“Awareness of passengers’ rights has grown from less than 1 per cent in 2008 to about 10 per cent, according to the European Consumer Centre. This has resulted in real payouts, which hurt airlines’ balance sheets,” he added.

Mr Whelan’s business idea received a gong at the Passenger Innovation Awards at the International Air Transport Association (IATA) World Passenger Symposium in Dubai in October 2016. He has since gone on to develop the minimum viable product with technical assistance from WiPro and is now looking to introduce a full-blown solution shortly.

“If I say so myself, it is a great idea and we’re on the verge of making it a reality. But to be honest I’m also fast running out of cash so if we don’t get some kind of funding through, I’m not sure how long we’ll be able to keep this going,” said Mr Whelan.

“Our selling point for would-be investors is that this business plan works not just for flight disruption but far beyond this. If we can make it work for compensating passengers though we can then look at rolling it across the aviation ecosystem,” he added.

Mr Whelan admits that he’s no techie and like many was suspicious of blockchain given its association with bitcoin.

“I was pretty wary of blockchain and we certainly didn’t go out to use it but having learned about it being based on a consensus model that uses secure contracts I came to realise that it could perfect for our solution,” he said.

Mr Whelan estimates Travacoin could be up and running within six months if it can get funding, although he admits that for the solution to really take off, he needs a critical mass of airlines to come on board.

This may not be easy even if carriers are coming round to the idea of compensating passengers early on.

“The IT guys working at airlines love our idea and pretty much all airlines are investing in blockchain at some level right now but at the executive level there is little knowledge of it and a high degree of cynicism,” said Mr Whelan.

“What we keep telling them however is as far as we are concerned it is a case of ‘bitcoin bad, blockchain good’,” he added.