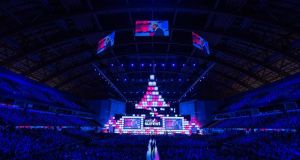 With the fuss over its future now settled, Web Summit returns to Lisbon again next week bringing along more than 70,000 attendees from 170 countries to talk tech.

Having recently agreed a €110 million deal with the event organisers to keep Web Summit in the Portuguese for the next decade, the host city can breathe a little easier this time round knowing that this year’s conference won’t be the last one it sees.

For the organisers, however, it is a different story. There has been something of a novelty factor attached to it being in Lisbon these past two years, but it remains to be seen whether the event might lose some of its lustre now that it is firmly attached to one city.

As in previous years there is certainly plenty for attendees at Web Summit to savour with 23 conferences taking place across nine main stages. An estimated 1,200 speakers are expected at the event, led by Twitter co-founder Evan Williams and the inventor of the World Wide Web Tim Berners-Lee.

As if that weren’t enough, there will also be the chief executives of Shell, Booking. com, TripAdvisor, Tommy Hilfiger, Western Union, the Guardian Media Group, the European Banking federation and SurveyMonkey on stage as well.

Web Summit officially gets under way on Monday evening with a series of small talks but it begins in earnest on Tuesday morning with speakers including Slack co-founder Cal Henderson. Ev Williams, who now leads online publishing platform Medium, will close the event on Thursday.

The Irish-founded tech conference started in Dublin in 2009 with less than 400 attendees. It moved to Lisbon under controversial circumstances in 2016, a decision, which might have angered many but also proved worthwhile financially. Accounts filed for the company that operates the Web Summit reported record profits of €2.27 million with gross profits of €11.5 million for the year it relocated to Portugal.

The success of the event has also led to a plethora of sister events including Rise, Collision and MoneyConf, the latter of which took place in Dublin this year after previously being held in Belfast and Madrid.

The agreement to remain in Lisbon, which includes a buyout clause to the value of €3 billion, was agreed after a tender process that involved offers from over 20 European cities. A part of the deal is to double the size of the Altice Arena and FIL (Feira Internacional de Lisboa) venues within the next three years, to fit Web Summit’s growth forecasts.