Microsoft launches tool in Ireland to avoid interference in elections 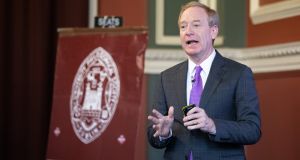 Microsoft has launched a service in Ireland to protect political candidates and parties against possible interference in elections.

AccountGuard, which protects the Microsoft accounts of those involved in political campaigns, forms part of the company’s work to eliminate “threats to democracy . . . that come from the internet”, according to the tech giant’s president, Brad Smith.

Speaking on Monday at an event organised by Trinity College Dublin’s Philosophical Society, Mr Smith said the company takes on battles to protect users, including by disrupting and dismantling new attacks associated with Russian hackers.

“What we’ve seen around the world over the past few years is governments in some places focusing on attacking political candidates . . . We need to take steps to address all of these problems,” he said.

The new programme from US tech giant Microsoft follows attempts by foreign entities to carry out cyber attacks to undermine trust in the democratic process.

The “defending democracy” programme was launched in April, with the upcoming US midterm elections an early focus of the initiative.

AccountGuard, launched in the UK last week, is open to all candidates running for political office, the campaign organisations of all elected politicians, political parties and certain non-governmental organisations involved in the democratic process.

Users with Office 365, Outlook.com or Hotmail, are effectively offered an extra layer of defence against attacks as AccountGuard notifies a user in the case of a verifiable threat or compromise by a known actor.

“First, by examining certain compromises or targeted campaigns against organisational email and personal accounts, we’re able to see larger patterns that are not apparent when accounts are examined in isolation. Second, providing a political organisation with knowledge that a member of its staff has been attacked by a nation-state adversary is a key piece of information it can use to increase its security posture,” Tom Burt, Microsoft’s corporate vice president for customer security and trust, wrote in an August blog post announcing the technology.

The free-to-use technology also offers recommendations if a security compromise is confirmed along with best online practices for those in the political sphere.

“The protection of people on the internet is no longer something we can look to governments to advance . . . it is an exercise that requires governments and companies and civil society to come together,” said Mr Smith, who received the Philosophical Society’s gold medal of honorary patronage on Monday.

Microsoft had previously signalled its intentions to work with other organisations in protecting against cyber attacks with Mr Burt saying the company “cannot solve those problem alone”.

“We know our colleagues in the industry are working diligently to take similar steps, and we’re enthusiastic about their work. As we expand Microsoft AccountGuard, we will look for opportunities to co-ordinate with their efforts,” he said.