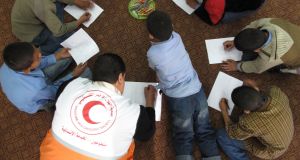 AID:Tech, a Dublin-headquartered start-up that has developed blockchain technology to distribute international aid in refugee camps, has teamed up with the Irish Red Cross for a new app that brings transparency to charitable donations.

The start-up, which was last month named as the overall Irish Times Innovation of the Year award winner, said its new TraceDonate app enables donors to find out exactly what their donation is being spent on. It also allows them to track their contribution history and to stay informed about charitable campaigns that are running.

Non-governmental organisations can use the app to receive donations directly and to build branded pages for particular campaigns.

“We want to become the benchmark for the donation process, and our relationship with AID:Tech provides us with that opportunity,” he added.

Founded in 2014, AID:Tech’s software platform enables entitlements like aid, welfare, remittances, donations and healthcare to be digitised and delivered through blockchain technology in a completely transparent manner.

AID:Tech, which was the first company in the world to deliver international aid using blockchain to Syrian refugees in northern Lebanon, earlier this year raised an estimated €1 million from backers including Enterprise Ireland SGInnovate, the venture capital arm of the Singaporean development authority.

The investment marked the first time that either State-backed organisations had put money into a blockchain company.

1 Johnny Ronan loses out on €315m Dublin docklands deal
2 Can Big Tech’s backing install Biden in the White House?
3 How long can Government afford to keep State pension age at 66?
4 Revenue accused of harassing businesses over Covid wage subsidy scheme
5 Give your home a smart makeover with some clever appliances
Real news has value SUBSCRIBE