Irish know-how proves to be passport to success for Tanzania 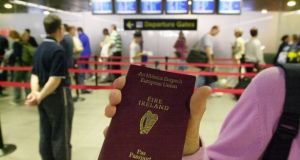 It is a long way from Dublin to Dar Es Salaam but Tanzanian citizens looking to acquire a new passport will soon receive documents that have been produced in Ireland.

On Wednesday, the Tanzanian government unveiled a new ePassport service for its 56 million-plus citizens that is modelled on the Irish system rolled out here 12 years ago.

That system saw the introduction of biometric passports, with all documents coming with a microchip that stored biographical information and a digital image of a photograph of the holder.

The Irish ePassport, which also has a number of security features designed to protect the identity of the bearer and to guard against the skimming of information on the microchip, has formed the basis for the new Tanzanian electronic passport.

HID Global, a Texas-based manufacturer of secure identity systems, and DLRS Group, a Co Wicklow-headquartered security print company, won the contract to develop the original Irish ePassport and have won a similar agreement for the Tanzanian one.

As part of the deal, the booklet is to be manufactured at DLRS in Bray with the polycarbonate datapage produced at HID’s facility in Connemara, Co Galway.

Just as the Irish passport includes images of locations around the country, the Tanzanian version features images of Mount Kilimanjaro and Zanzibar’s House of Wonders.

The project was implemented in collaboration with the Irish Government with the technology behind the new system is reported to have cost about $58 million.

“The Irish Passport Service has worked with the Tanzanian government to share our insights into the design and development of an e-passport. The first Irish ePassport was launched in 2006 so Ireland was able to share over a decade of lessons learned in the area of book security and design,” a spokesman for the Department of Foreign Affairs said.

The Irish ePassport has received a number of awards over the years since it was introduced. It is currently ranked as the fifth most powerful passport in the world, according to the Henley Index, and is fourth in Arton’s alternative ranking.

A record 779,000 Irish passports were issued in 2017 in the wake of the Brexit referendum, with one in five passport applications received from Irish citizens living in Northern Ireland and Britain.

HID and DLRS, a subsidiary of Smurfit Kappa, also collaborated with the Irish Passport Service on the introduction of the Passport card in 2015, the first card of its type in the world.