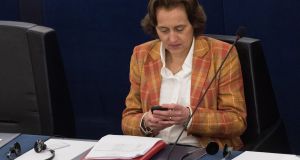 An industry group along with US internet giants Facebook and Google raised concerns with Irish officials about Germany’s Network Enforcement Act, better known as NetzDG, in an attempt to have it reviewed at EU level ahead of the law being passed in June 2017.

For “evidently unlawful” material, the deadline is 24 hours, while hate speech or fake news that isn’t strictly illegal must vanish within seven days.

In May 2017, Technology Ireland, an industry group within business lobby Ibec, told the then minister for european affairs, Dara Murphy, that the industry was “deeply concerned” that the German law “would detract from the valuable work being undertaken to create a digital single market across the EU”.

Paul Sweetman, director of the group, described the threat of sanctions for failing to remove “ill-defined ‘obviously’ illegal content” within 24 hours as “draconian”.

He warned that the German law would break away from existing EU-wide ecommerce legislation and “would immediately be in conflict with it”. It would even lead to lawful content being deleted, he said.

“The draft German law’s rigid deadlines and penalties would most certainly lead operators of social networks to adopt a strategy of over-blocking to avoid the sanctions,” wrote Mr Sweetman in his letter of May 31st, 2017.

“This would have catastrophic consequences on the freedom of expression.”

He called on the Government to raise these issues formally with the EU Commission and seek support from other EU member states to intervene to have the law reviewed.

Facebook outlined its concerns about the law with Mr Murphy, whose ministerial brief included the EU digital single market and data protection, at a meeting in Brussels on April 28th, 2017.

The meeting was attended by Department of the Taoiseach officials, the Permanent Representative of Ireland to the EU, Ambassador Declan Kelleher, and three public policy and EU affairs representatives from Facebook.

A note of the meeting, released by the department under the Freedom of Information Act, shows that they discussed the growth of fake news and Facebook’s work to mitigate it.

A few weeks prior to the meeting, Facebook’s head of public policy for Ireland, Niamh Sweeney, sent the department a finding by a German law professor showing how the law ran contrary to EU law.

Mr Murphy told The Irish Times that he listened to Facebook’s concerns but did not feel that there was a role for the Government in raising concerns about the law with the commission.

Department of Foreign Affairs records show that Google attempted to arrange a meeting in May 2017 between one of its German representatives and Irish officials in Brussels to outline its concerns about the law.

Germany’s federal justice ministry drafted the law in frustration at what it saw as foot-dragging by social media companies to respond to problematic postings and to respect postwar-Germany’s stringent hate speech laws.

A series of high-profile post deletions and the suspensions of social media accounts have revived criticisms from last year that, with the NetzDG law, German’s justice minister Heiko Maas was heading a “Ministry of Truth”.

A satirical website mocking her posts was also blocked, reviving predictions by critics of the law that companies would pre-emptively overblock rather than risk fines.