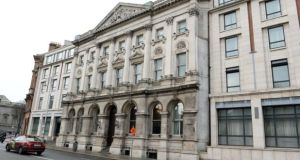 He also took precautions to avoid the capital-gains hit that the so-called inversion would trigger for him and other investors.

The day before the deal was announced, Mr Malone - the company’s chairman and controlling shareholder - transferred $600 million of his shares into a tax-exempt charitable trust. He avoided paying taxes on his remaining stake, worth about $260 million, by exploiting IRS regulations meant to block a different loophole.

All told, Mr Malone escaped about $200 million in personal taxes, and Liberty Global’s US shareholders together likely saved more than a billion dollars, according to data compiled by Bloomberg.

Mr Malone - whose net worth is $7.5 billion, according to the Bloomberg Billionaires Index - has a history of creative tax- avoidance tactics.

Over the years, many of the 73-year-old media billionaire’s biggest deals, such as buying the Atlanta Braves, have helped his companies to cut their tax bills. Mr Malone, who owns the The Westin and the Trinity Capital Hotel in Dublin, as well as Humewood Castle in Co Wicklow, has at least four other charitable trusts, with more than $210 million in assets, IRS records show. Such trusts permit wealthy individuals to use the tax-exempt status of a charity to shelter income.

In the past two years, he has also taken advantage of an Irish tax break to buy a number of properties in Ireland.

A Connecticut native, Mr Malone runs his growing media empire from his adopted state of Colorado. He recently surpassed Ted Turner as the largest private landowner in the US, according to The Land Report magazine. He owns about 2.2 million acres, including more than 5 per cent of Maine’s total land mass.

Mr Malone, a Yale graduate with a doctorate in operations research from Johns Hopkins University, began his career doing research for the old Bell Labs. He built his reputation turning a tiny Denver cable company called Tele-Communications Inc. into the country’s largest cable operator. He sold it to ATandT for $59 billion in 1999.

Since 1995, Mr Malone has served as an unpaid director of the Washington-based libertarian think tank Cato Institute, which advocates for lower taxes.

In his business life, Mr Malone has put that anti-tax philosophy to work. In 2006, for example, Liberty Media cashed out its stake in Time Warner without triggering a capital gains tax. Along with the $1.4 billion it got in cash from shedding the shares, Liberty also received ownership of the Atlanta Braves baseball team from Time Warner.

Although the Braves were en route to their first losing season in 16 years, the move was worth it. Acquiring the team via a tax planning technique known as a “cash rich splitoff” entirely eliminated the company’s tax bill on the deal.

The Braves, which Liberty Media still owns, broke ground in September on a stadium in the Atlanta suburbs, scheduled to be subsidised with more than $300 million of public funds.

In 2009, Liberty Media invested $530 million in money- losing satellite radio company Sirius XM. The main attraction: Sirius’s $6 billion in tax losses, which could be used to offset taxes on Liberty’s future profits. Sirius’ stock, worth about a dime when Liberty made its investment, has risen to more than $3 since then.

The tale of Malone’s inversion tax coup goes back to 2004, when Liberty Media spun off its overseas cable business into a separate US company, tax-free. That company, eventually renamed Liberty Global, now has about 25 million cable, broadband and telephone customers in 14 countries, including Germany, Hungary, Belgium and Ireland. It provides those services under various brand names, including Unitymedia, UPC and Telenet.

Mr Malone has served as chairman since then. He effectively controls the company by owning almost 87 per cent of Liberty Global’s super-voting B shares. That gives him about 30 per cent of the company’s total votes, the biggest voting bloc of any shareholder.

By 2013, however, Liberty Global had a problem: if it wanted to tap into its offshore cash for some purposes, it could trigger a 35 per cent corporate tax bill in the US, minus credits for income taxes paid overseas. So, in February 2013, Liberty announced it would acquire Virgin Media. Since the deal was announced, Liberty Global’s three classes of shares have risen, helping to add about $160 million to Mr Malone’s net worth. The inversion can help Liberty Global gain access to offshore cash without generating a US tax bill.

In a typical inversion, Mr Malone would have owed capital gains taxes at a rate of 23.8 per cent on his stake worth about $860 million. He took two steps to avoid this bill. The day before the deal was announced, he transferred about $600 million worth of his shares into the Malone LG 2013 Charitable Remainder Unitrust.

Such trusts permit wealthy individuals to avoid tax by using the tax-exempt status of their favorite charity. The use of such a vehicle by former Massachusetts governor Mitt Romney became controversial during his 2012 presidential campaign.

Tax returns obtained by Bloomberg News through a Freedom of Information Act request showed that Mr Romney would likely receive more in annuity payments from the trust than it would leave his chosen charity. A Romney spokesman said at the time that the trust “operated in accordance with the law.”

Liberty Global also figured out a way around a tax bill for Malone’s remaining stake, as well as for the rest of the company’s US investors. It used the government’s own anti- abuse rules to its advantage. US companies are permitted to defer income taxes on profits attributed to foreign operations, until they bring home the cash generated by those earnings. Over the years, companies including IBM and Hewlett-Packard have used strategies to bring billions home yet avoid the tax.

Liberty Global devised a transaction that would indeed generate income - but credited those profits to a newly created UK unit, not subject to US tax. Because the income satisfied the US government’s test, investors weren’t subject to any capital-gains tax. And since the UK has different tax rules, that particular income didn’t generate any UK tax bill either.

“The result was that Malone and his fellow shareholders didn’t have to pay the tax bill that inversion would normally generate. Malone threw a multi-billion dollar left hook at the Treasury Department, ” said Samuel C Thompson, a law professor at Pennsylvania State University. “They didn’t see it coming.”

The US Treasury Department amended its rules in April to prevent a maneuver like Liberty Global’s from happening again. However, it permitted the deal to stand.

Liberty Global “turned a provision that was supposed to be punitive into something they used for their benefit,” said Mr Willens, the independent accounting analyst. “When you do that, the IRS can’t challenge it. How can the government disavow a provision it worked on for a long time?”

Meanwhile, Liberty Global’s new UK parent company is taking steps to avoid the risk of incurring U.S. corporate taxes on cash from its foreign units. That’s because such funds might have to pass through a US subsidiary.

In a filing last April, Liberty Global disclosed that a US subsidiary will pay at least $7 billion in tax deductible interest to its new UK parent over the next decade. Such payments are known to tax lawyers as “earnings stripping,” because the big interest deductions strip profits out of the US, thus cutting any tax obligation.

Liberty Global’s moves are just one facet of Mr Malone’s propensity for tax-free deals. In the past two years, he has bought four properties in Ireland, which his ancestors left in the 1830s. They include Humewood, an €8 million , 15 bedroom castle in Co Wicklow. He has also spent a combined 130 million euros ($163 million) to buy three of Dublin’s most central hotels: the Westin, the Trinity Capital Hotel and the Hilton

A tax break paved the way. In early 2012, Ireland introduced a capital gains tax holiday for investors buying Irish real estate who hold onto it for seven years. In an interview last year, Mr Malone talked about his motivations for buying the castle.

He did not mention the break on Ireland’s 33 per cent capital gains tax.

“A combination of cheap money and a gloomy view of the future gives rise to opportunity for those who aren’t quite so gloomy,” he said.