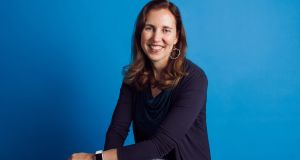 Intercom, the Irish-founded software company which is valued at over $1 billion (€842.9 million), recorded another sharp rise in revenues at its Dublin unit for the year ended January 31st, 2019, with turnover jumping from $61.5 million to $89.9 million.

The Dublin and San Francisco-headquartered company also saw pretax losses more than double however to $56.1 million from $22.4 million in the prior year. It attributed the increase to a one-time share-based payment relating to a $10 million tender offer.

Its products enable companies to communicate easily with customers through their own websites and apps, on social media and by email.

Founded in Dublin in 2011 by Mr McCabe, Des Traynor, Ciarán Lee and David Barrett, Intercom claims more than a billion end-users and counts the likes of Facebook and Amazon as customers. The company currently employs 600 people, of whom about 300 are in Dublin.

The newly filed accounts show Intercom grew its paying customer base by 17.9 per cent during the 12 months to the end of January 2019 with the average revenue per account rising by 24.1 per cent over the same period.

A breakdown of turnover shows $42.7 million in revenues derived from North America, $28.3 million from Europe and $14.2 million from Asia Pacific.

The company said current year revenue is in line with 2019 and is expected to increase throughout the remainder of 2020 and in subsequent years.

As of May 21st, 2020, the group had $87.4 million in cash and cash equivalents and said it had not been materially impacted by the Covid-19 crisis.

The company employed an average of 321 people in Dublin during the year under review, up from in 2018. Staff costs, including wages and salaries, more than doubled in fiscal 2019 to $43.8 million from $20.4 million in 2018. Key management shares $6.5 million in share payments last year.

Intercom achieved so-called “unicorn status” two years ago when its valuation topped $1 billion. Overall, the business has secured more than $240 million from backers.

The company, which is based in Anglo Irish Bank’s former headquarters on St Stephen’s Green, late last year signed an 18-year lease for a new 10,500sq m office, close to the National Concert Hall. It will pay a quarterly base rent of $2.1 million for the property with the total base rent payable over the lease period estimated at $137.8 million.