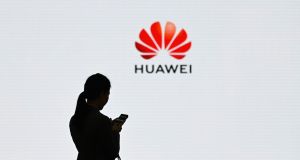 This file photo shows a staff member of Huawei using her mobile phone at the Huawei Digital Transformation Showcase in Shenzhen, China in 2019. Huawei faces being shut out of India’s 5G network due to growing geopolitical tensions with China. Photograph: WANG ZHAO/AFP via Getty Images

Just under a year ago, Jay Chen, Huawei India’s then chief executive, was riding high at the Indian Mobile Congress as he discussed the imminent rollout of 5G in the country.

“Huawei will play a very active role in the India 5G journey,” Mr Chen, who has since been promoted, said at the gathering of the country’s biggest telecoms players. “My perception is the Indian government shows their full confidence and support in Huawei.”

Less than 12 months on, that picture is very different. Huawei - already grappling with a fresh set of sanctions imposed by Washington over security concerns - is facing another crisis after a brutal border clash between India and China earlier this year spurred New Delhi to give unofficial orders to telecoms companies barring them from using Chinese vendors for future investments.

At stake for Huawei is access to the world’s second-largest mobile market, with more than 850 million users.

“Huawei’s fate is hanging in the balance,” said Vivekanand Subbaraman, analyst at Ambit Capital in Mumbai. “I don’t think it will be back to the good old days when Huawei played a very big role in the Indian network.”

But for India, shutting Huawei and other Chinese companies out of the race to provide kit for the 5G era also creates an operational problem and could mean a more rapid consolidation of market control for Mukesh Ambani’s Jio Platforms, the country’s largest telecoms operator.

Huawei has weathered storms with New Delhi before, including geopolitical tension during a border stand-off in 2017, to become one of the top three telecom equipment makers in the country alongside Sweden’s Ericsson and Finnish group Nokia.

Having operated in India for more than two decades, it now sells everything from mobile phones to speakers, and has invested in cloud computing services, signing partnership deals with groups including Infosys.

“India is an important market for Huawei and we have a long-term commitment,” Huawei said in a statement to the FT. “We are confident of our future...we will continue to work closely with all stakeholders, including government, customers and industry partners.”

The group is estimated to hold about a 24 per cent market share for telecoms equipment in India, according to consultancy Counterpoint Research.

Working with two of the three big Indian carriers, Bharti Airtel and Vodafone Idea - a partnership between the UK telecoms company and India’s Aditya Birla Group - Huawei had built a significant part of the country’s 4G network and was gearing up to do the same for 5G when the Himalayan border clash happened in June.

But the fact that New Delhi has not issued any formal written ban on Huawei reflects a broader dilemma facing India, according to analysts.

While there is a growing backlash against Chinese companies in Prime Minister Narendra Modi’s government, officials recognise they are dependent on cheap kit if they are to realise India’s vast potential as a digital superpower.

A 5G rollout using Indian-made equipment, as proposed by Mr Ambani, would be “difficult to execute”, said Sanchit Vir Gogia, chief executive of Greyhound Research. “The fact that the government hasn’t come up with an official diktat on the ban only goes to show the indecisiveness on which way to go.”

The 5G kit-making alternatives to Huawei - Ericsson, Nokia and Samsung - charge up to 30 per cent more than their Chinese counterpart. With Bharti Airtel and Vodafone Idea under financial strain, a migration away from Huawei would prolong an already complicated transition to 5G.

Both companies are awaiting a Supreme Court judgment on a long-running case that may result in billions of dollars in retrospective taxes and penalties, and possibly additional spectrum fees.

Persuading Indian consumers to pay more to support 5G investment will also be a steep challenge following a cut-throat price war sparked by the entry of Jio into the market in 2016.

If India decides to launch a 5G spectrum auction in the first half of 2021, Jio is likely to consolidate its position as the largest mobile operator in the country, having partnered with Samsung for its 4G rollout and already ruled out using Chinese gear.

With the future still uncertain, Indian carriers including Bharti and Vodafone Idea have already started laying the groundwork for life without Huawei, submitting fresh bids for 5G trials that leave out Chinese companies.

“It all depends on what the government decides. They [Huawei]\ are very nervous,” said an executive at a major carrier. “They have sunk in a lot of money in India, they were all ready, then suddenly things changed.”

The government has said there is no official ban on Chinese groups, but for national security expert Bharat Karnad it is clear that a crucial shift in the attitude towards China has taken place.

“The government of India is seeing that anything Chinese is ipso facto suspect, and that at least in terms of telecoms, you can’t allow these guys to come in,” he said.